I’ve often found that I respond to new ideas in an open-minded way. I can be relied on the react favourably to change. A shift from the expected norm will not cause be to moan or grumble. If change is for the better, than I can easily get on board. Nevertheless, a lot of change all at once can cause me a few problems. It’s my own fault really; had I followed the Pokémon games through the generations I’m sure I’d not feel so out of touch.

I played the first generation of Pokémon obsessively. I fondly remember the hours and days sunk into Pokémon Blue, catching, levelling and fighting my way through every possible challenge the game had to offer. Yet, when the next instalment of Pokémon rolled round, I didn’t jump ship. This is partly due to the feeling that starting a new game meant starting over again. In my school, very few people switched to generation II; no one wanted to get the new game if no one else was going to share the experience. If we wanted to play Pokémon, we had Red and Blue (and Yellow).

As I’ve said in the past, I am a gamer who is happy to wait. So when Generation III emerged, my reaction was: “I can play that once I’ve tried the previous games”. But I wasn’t in any rush to play Generation II either. This situation snowballed with the release of Generations IV and V. I have never played these editions of Pokémon; I never actually bought the consoles they run on. Until last year, I had only played Pokémon Blue. May the Gamer Gods forgive me.

In January of this year, I bought myself a Nintendo 3DS. The primary reason for this was a so that I could relive the joy of Zelda games from my GameBoy Color days whilst playing the New Legend of Zelda.

With those games completed, I realised that I could dabble once again with Pokémon. As I started up Pokémon Y over ten years after playing Pokémon Blue, that same old excitement came rushing back.

I’ve been playing for over a month now and I’m enjoying the game. I’m having a tonne of fun, hampered only by the sheer amount of new stuff in the game. Whilst I’m sure many of these features are old news to players who have followed the franchise, for me it’s a big change all at once. I’ve managed to accept the differences maturely, but I can’t help feeling out of my depth sometimes. There are lots of examples I could mention, but for today I’ll just mention one simple but significant difference that has occurred between Generations I and VI: getting from A to B. 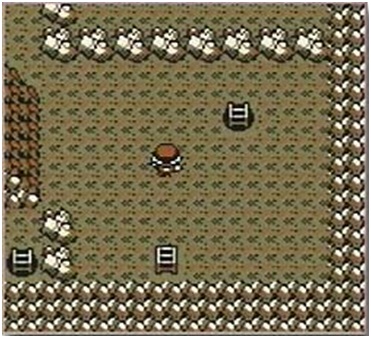 When you journey through Kanto, you do sowalking. Slowly and steadily, you stroll along lanes and through caves, battling Pokémon at your leisure. You walk into each new city; speak to everyone you pass; explore all the nooks and crannies without feeling the need to rush. This is the pace I’m used to with Pokémon.

When the game finally hands you a bicycle it’s a treat and all the more enjoyable for it. You won’t use the bike all the time, but it makes back-tracking easier. The final step in quick-travel is then teaching ‘Fly’ to a Pokémon, but by then I felt I knew Kanto well enough to speed things up. Nevertheless, I never begrudge the game for the casual walking pace.

When I started playing Pokémon Y, I was expecting the same pattern. I wanted a gentle pace as I explore the first half of the game, and then I would get the bike and speed things up when I feel the need. How wrong I was. Not only does the game instantly offer me a ‘sprint’ option, but after an hour my character is on wheels. I was very aware that, at a very early point in the game, I was being rushed. I did a little research and discovered that this “need for speed” began with Generation III.

I know this grumble might very well make me sound old, but that is a good way of summarising my feelings at the start of the game. I felt old. I could sense myself wanted to chastise my Pokémon character for wearing running shoes or skates. What’s the rush? We’re only at the first city and you want to run and dash everywhere? In my day, we took our time and appreciated what was around us. How are you supposed to catch Pokémon if you go whizzing past them? 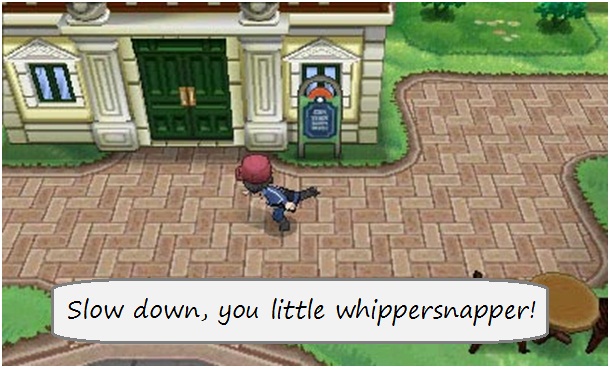 I wouldn’t feel like such a curmudgeon if the skates could be taken off. I can easily step on and off the bike I was eventually awarded. But no, those blasted contraptions are welded to my feet and using the analogue stick will cause my character to flit around the screen.

If I prefer to walk (which I most certainly do) then I must resort to using d-pad, which seems to suggest that people of Kalos actually find it more difficult to walk than skate.

So I deliberately trudge around Pokemon Y on foot, quietly pleased with myself for taking my time to enjoy and appreciate the little details in the game. I’m serious. Unless I absolutely need to hurry, I defiantly keep my left thumb affixed to the d-pad and walk everywhere. I have used the skates, when it’s the only way to reach a hidden treasure. And because I don’t use them very often, I can’t actually steer them very well, which only helps to emphasize my old-man reaction to how much Pokémon has changed since ‘my day’.

It’s such a little change in the scheme of things, and I must emphasise that I love the new generation. Part of the charm of Pokémon Y is the fact that it is still the same wonderful game at its core with new bits added on. If you can accept all the new stuff, then you can enjoy this Generation as much as the previous ones. It’s just going to take me a bit longer than most…

Thank You for Reading.

This is just one example of the ways that Pokémon Generation VI has left me bemused and befuzzled. In the future I may mention other reasons, but I’ll leave it there for now. I’ve got some Pokémon to play. After all, it’s taking me a long time to get anywhere these days. Feel free to tell me how much of a ‘square’ I’m being below, or share your views on how Pokémon has changed.

One thought on “​Returning to Pokémon: Why is everybody in a rush?”