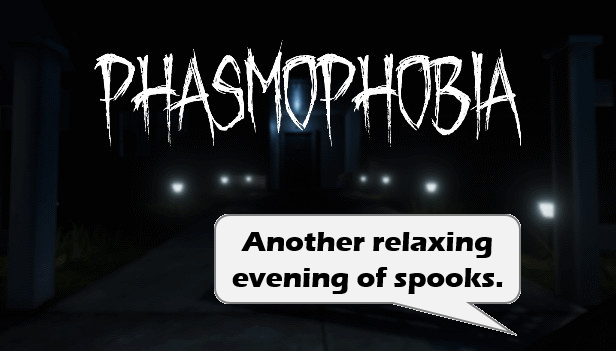 It makes no sense. For the last few years I steered away from horror games. Even games with high tension or stress-inducing gameplay have been avoided. I might watch other gamers play spooky, stressful games, but that’s as close as I get.

The reason: I only get the occasional night to game. Between school work, house work, child care and the occasional D&D game, time for video games is precious and usually just before bed time. Games with horror themes or those that require intense concentration leave me more wired than when I started. I realised I needed to switch things up half-way through Dark Souls. I was ending each evening game more stressed, focused and awake than I care to be just before bed time.

So why have I been playing Phasmophobia for the last few weeks? I could definitely be watching streamers play the game – and I was – but instead I decided to spend the odd evening in a scary game when I’d told myself that was a bad idea. Not only that, but I often play the game solo when my friends aren’t free to join me for spooks.

The main reason would be the puzzle element. I enjoy my puzzle games, escape rooms, riddles… trying to work out what ghosts haunts each location definitely appeals to me. The added bonus of jump scares from a ghost hissing or humming in my ear and being randomly hunted makes for an intriguing challenge.

Another positive is that each game of Phasmophobia is short. Now I’ve got a handle on it, I can complete a game within ten minutes, sometimes five. This means I can play again, or I can switch to something less tense before bed time. Furthermore, the game has no story, so the only reason to dive into another game is my current spook levels.

Most importantly, it’s as funny as it is scary. It has that new indie, under-development jankiness that adds more charm that it detracts from enjoyment. Sometimes it even adds to the spooks. On the one hand, spawning inside another player’s model and getting a face-full of eyes and teeth is always funny; having the ghost appear on the exact same spot you are standing is terrifying.

In any case, Phasmophobia should be a spooky game that I should be avoiding as my evenings entertainment. Instead, it’s turned out to be a fun little adventure that has just enough spooks to be fun without being too stressful. Maybe this means I should give Dark Souls another try… probably not.

Have you tried Phasmophobia? What do you make of it? Do you have the same issue with playing intense games late at night?

One thought on “Why on Earth am I Playing Phasmophobia?”