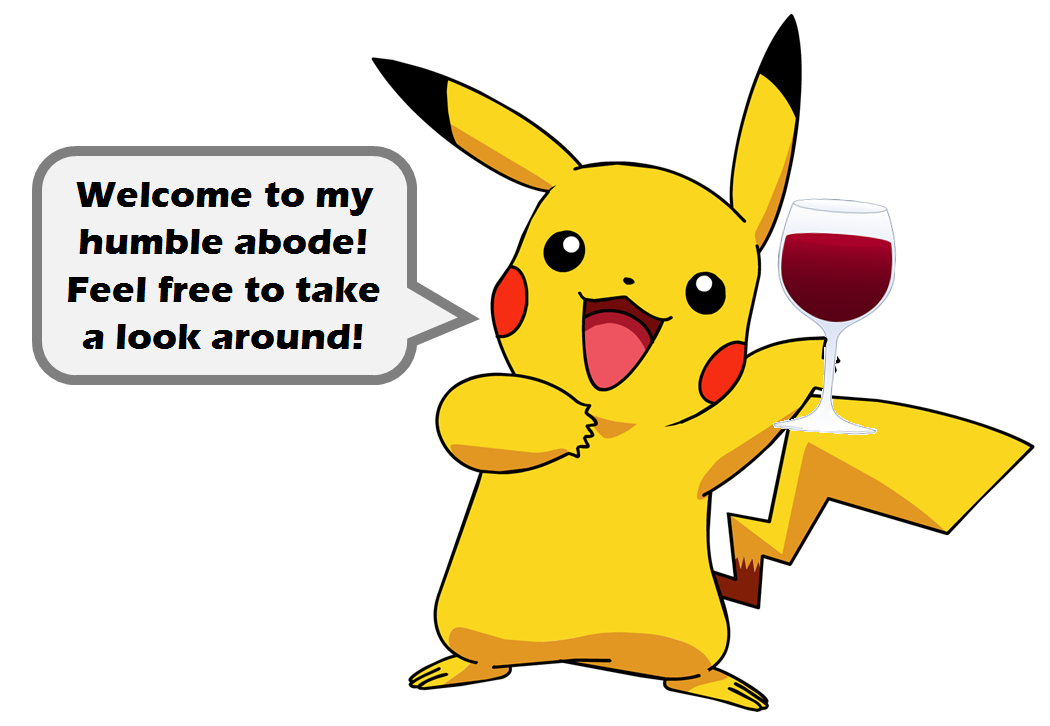 A dinner party doesn’t have to be a formal affair. There’s no reason why every guest should arrive in formal wear, or point the pinky finger when they sip drinks, or speak in a clipped ‘Queen’s English’ around the dinner table. You want your guests to behave, but they don’t have to be so prim and proper.

Let’s be honest, if I was hosting an entirely formal dinner party, most videogame characters wouldn’t get an invite. As loveable and iconic as so many virtual characters tend to be, most of them are ‘rough around the edges’. Minecraft Steve eats food by violently ramming it into the centre of his face. I adore Raziel from Soul Reaver but his diet consists mainly of human souls; his eating habits would put the other guests off their food. Most characters lack the ability to actually sit down, which would make an evening meal quite uncomfortable.

A dinner party with my favourite videogame characters would have to be a more relaxed atmosphere. The guests should feel that they can unwind and be a little rambunctious; a friendly, fun environment where everyone can be themselves.

The people you invite to a party will make the party. If I want the evening to be relaxed and sociable then the people there should represent that intent. My previous choice, Alyx Vance, fits the bill. The deuteragonist of Half Life has an instantly likeable demeanour, and whilst her conversations may shift to geekier topics, I can’t imagine anyone around the dinner table finding it hard to enjoy her company. The next guest I would invite would also make it very easy for a group of strangers to feel at home.

When I think of war leaders, I imagine a stoic ruthlessness, a penchant for violence, horrific discipline and a core of evil that justifies every action they take. ‘Jim’ Raynor bucks that trend. Whilst military leaders are often cold and calculating, Jim has warm, relaxed demeanour. He’s a tad sarcastic at times, and hard-headed, but his yearning to do the ‘right thing’ at all costs forms the basis of an honest and caring character. Whether he’s steering the course of the war from on high or leading the charge himself, James Raynor is calm and collected.

That’s not to say that James shouldn’t be taken seriously. In one of my favourite scenes ofStarcraft II, Jim finds himself at odds with his demoralised crew, who believe his recent actions show he’s gone soft. He also finds himself on the angry end of Tychus, the armour-clad convict and so-called ‘friend’. Not only is Jim able to deftly avoid Tychus’ rage and floor the man with ease, but he also manages to appease his crew with a few carefully poised words. A true warrior and an excellent leader.

His character would make an excellent addition to the party, and his views would make for curious conversation. He is an idealist; a real believer in justice and fairness. His resolve against the Queen of Blades shows how strong that resolve can be. I’d love to hear his thoughts on real life military history, world politics and such. His over-zealous nature would provoke some curious discussions, whilst his laidback attitude would prevent things from getting too heated. 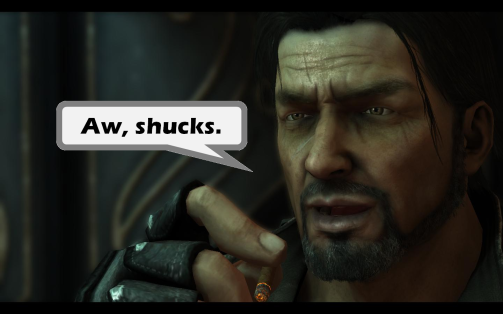 I also love Raynor’s character because it doesn’t quite fit the classic male protagonist frame. He ticks quite a few of the boxes – the muscles, the smoking and drinking, the maudlin moments – but his chilled style and quick wit set him apart. He’s a bit of a numpty sometimes, and gruff, but when he’s called on this behaviour he will reflect and learn. Every woman in the series is inexplicably drawn to him, but his convictions to the cause and old-school chivalry prevent any cringe-worthy situations. He certainly doesn’t break the mould, but he bends it a little.

I should also point out that I’m a fan of how Jim Raynor speaks. I’ve always been fond of the southern American accent. Whether it’s light accent like Malcolm Reynolds or heavy like Rooster Cogburn, I’m a fan of that way of talking. I’m sure most Americans will leap to tell me that Raynor’s voice is not a true southern accent, but it’s that stereotypical drawl that appeals to me. I’m a straight man, but if James Raynor called me “darlin'” I’d probably get the “the vapors”.

So, there are two people invited to this fictional soirée. Whilst I’m not introducing the guests in any particular order, I’m pretty sure I’d sit Alyx and Jim next to each other. They’re bound to find some common ground. Both of them come from pretty grim universes, and have a fair share of stories to pass back and forth. They both have an interest in all things mechanical – I’m sure Jim would want to know how Alyx put ‘Dog’ together all on her own.

Like Alyx, I won’t have to put too much emphasis on extravagant dining. As a space-faring soldier, the food and drink should be simple and filling. A good burger or rump steak would be an ideal choice. He’d no doubt appreciate a good beer rather than wine. I’m banking on Jim being a drinker of Ale or Bitter (like myself) rather than lagers. And you can bet that a good bottle of Whisky would be welcomed. 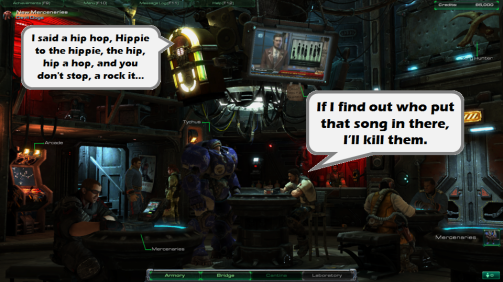 As for the entertainment, music would be important. Jim covets his vintage jukebox and his alternative/futurised collection of classic tunes. I know he’d enjoy listening to the ‘other’ versions of Sweet Home Alabama and Suspicious Minds. Aside from that, James Raynor would be quite happy to sit with a drink and shoot the breeze.

In short, Jim Raynor is a great person. Whilst his character is reserved for cutscenes and the occasional in-game quip, he is given more than enough screen time to show how interesting and complex he can be. I would invite him to my dinner party to learn more about his thoughts on the world(s). I’d also want him there to create a sociable atmosphere. He might be the saviour of worlds and all-round champion of Arse-Kickery, but you wouldn’t know that to talk to him.

In a few weeks’ time I’ll reveal Dinner Guest Number Three. In the meantime, why not share your favourite characters. Remember, the ‘dinner party’ idea restricts your options. Which video game people would you want round your house for the evening? Have you picked them because you know you’ll get along or because you want to know more about them? What do you think they’d bring to the evening? Can you think of anyone else that would be a bad idea?

Thank You For Playing