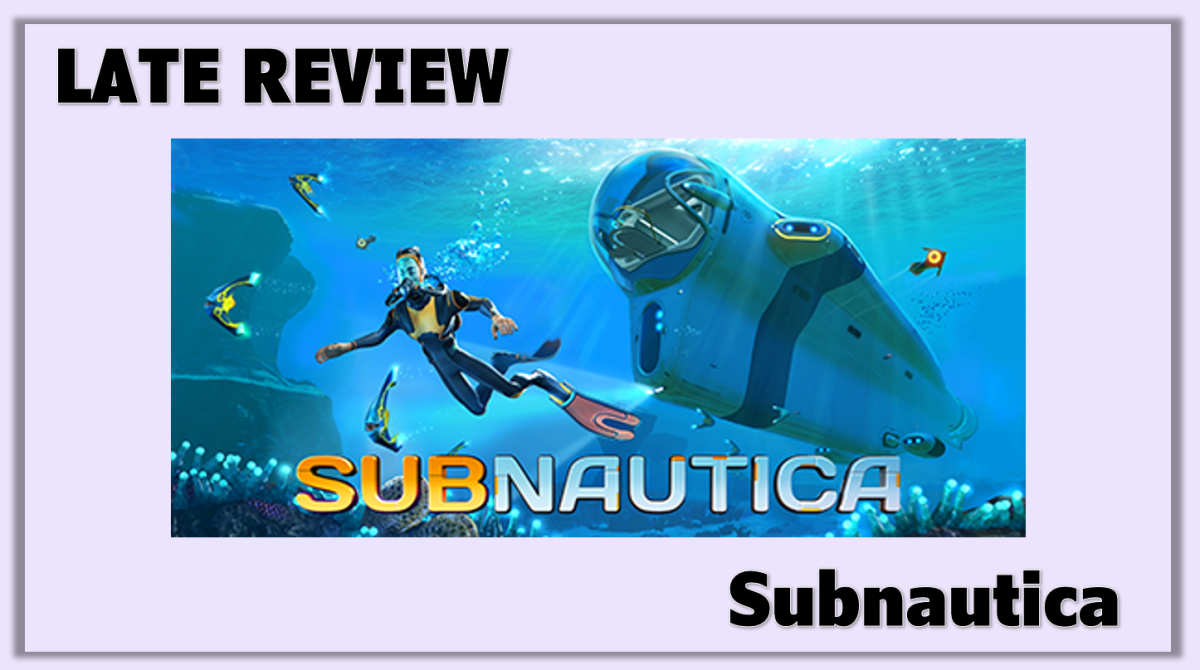 I am not a particularly adventurous person. For example, I would never, ever go skydiving. I have however, been swimming in the ocean once. I can’t say I entirely enjoyed the experience. I’m glad I did it, and it was a great experience, but I wasn’t ever completely happy about being there.

That’s because the ocean is a scary place. Floating in an expanse of seemingly endless water, knowingly surrounded by life that can move much faster and more gracefully than you that may, at any time, want to investigate your level of tastiness, creates a very daunting atmosphere.

Of course, I could leave the ocean at any time. I wasn’t trapped there. Whilst Earth’s oceans do contain dangerous sea creatures, I was no where near exploding fish or leviathans the length of two football pitches. I also didn’t have to arrive at the ocean on a crashing space ship. All these things would make the ocean much more terrifying, and part of the reason why Subnautica is such a fascinating game.

I wasn’t ever planning to play this game. I’d seen the game played on YouTube, and been left with the impression that this was just another crafting, survival game, and the video I saw didn’t go into much depth (bu-dum-bum tish?). It wasn’t a game any friends had played, so it was never recommended.

What was recommended to me was a second YouTube video that compiled a bunch of clips of Twitch Streamers freaking out. I was confused and intrigued – how was a game where you swim in coral reefs and catch fish so jump-scary?

How the Game was Played

Simply put, this game has the kind of atmosphere that only a small list of games can match. I can’t say for certain how much of the reaction I had to this game was down to its design or my own trepidation, but the game definitely caused a range of emotions.

At first, there is the wonderment of exploring the coral reefs and absurd marine life, with only the standard life meters to keep an eye on. The sound design, matched with the water and shadow effects definitely evoked the majesty of the sea, whilst the almost immediate chance to delve into underwater tunnels and caves triggered a claustrophobic (or rather bathophobic?) reaction. 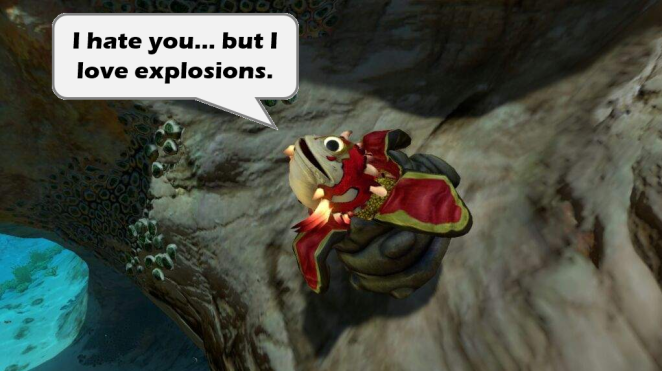 This sensation immediately gave way to panic when the first creature attacked me. Within the earliest caves of the game lurks a fish that I would best summarise as a puffer fish crossed with a stick of dynamite, with the most idiotic ‘defence’ mechanism. Despite any evidence that you would do harm, the thing surges towards you, howling all the way, before detonating itself. At the very least, you have to admire the fact that a species like that has managed to survive without exploding itself out of existence.

Absurdity aside, the effect is terrifying at first. Being underwater increases the directions an enemy can appear from. You often can’t even see where the screaming, fishy explosion is coming from.

As you delve deeper, the ocean gets darker, more oppressive and more deadly. Your Gamer Brain tells you that to dive is to progress and unlock new items, but the Primal Brain slowly starts to retreat to the back of your head. I’ve spoken about how games add logic to the borders of the game world, but never has going out of bounds ever wrenched my gut so effectively.

The overall atmosphere and look of the world are the greatest parts of this game. What is more, the mystery and the tension never let up. Whilst some games get less tense or scary or thrilling over time, the moment you feel this way about Subnautica you also realise that you must now dive deeper, and the tension is renewed.

So many games have tech trees and crafting mechanics. Way too many in fact. A decent proportion of these mechanics are largely superfluous, or just not very interesting. Subnautica hosts a much more interesting, much more relevant system.

For one thing, it keeps things simple. Need food and water? Grab a fish. There’s some that are more meaty than others and there’s another that apparently evolved from a water balloon. Getting bored of catching fish? There’s tech you can find that uses gravity to catch fish. Don’t think too long about that one.

The premise of the game – crash landing on an ocean planet – provides the game with a simple way of providing you fun toys to play with whilst you are stuck there. Other ships have been here before, and when your ship crashed it shed it’s contents across the planet like a snake with eczema. Explore diligently enough, and you can have all sorts of gadgets and gizmos that you don’t have to share with anyone.

Another reason why the crafting element of this game works so well is that all these fun devices and structures are needed to progress. Diving deeper requires better kit. Once you find the specs and resources required to make that kit, you dive deeper and discover new specs and resources which allow you to go even further. If a new discovery doesn’t allow for further transport, it makes a chore you’ve done many before so much easier.

Of course, it wouldn’t be a crafting game if you didn’t build a home, but this habitat is much more fundamental to the game. Not only does it save on how often you swim back and forth to the surface, but the much needed floor-space becomes an essential platform for the devices you need to make to progress.

As with every open world game, there is a story that sits politely in the background, waiting for you to finish wandering around smelling the plankton. There are also extra bits of story and lore that can be found in text and audio form. Much of the latter revolves around other, less successful residents of this ocean world. 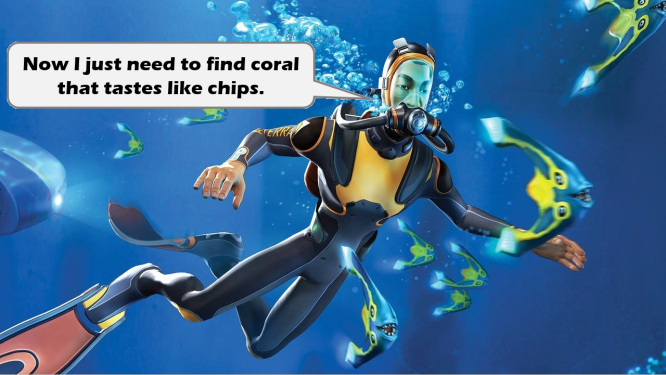 The underlying story is fascinating as a concept, and there are some fun revelations along the way, but the story itself isn’t as fun as the visual discoveries you make. This game doesn’t need a heavy story, and I would have honestly been happier if there was less to read and listen to. I would often find a wreck or old, abandoned habitat on the sea bed, and marvel at what could have happened based on what was left. Finding the log and reading/listening to it did answer the question, but rarely did it wow me as much as the initial find.

It isn’t as though the story is tacked on. It’s a fine little tale. There is a definite, full world here, and a clear progression until the endgame. The thought I had very clearly whilst playing this game was that I would have had just as much enjoyment and excitement without any world-building through text or dialogue. If anything, this lack of ‘contact’ would have added to the feeling of isolation.

On the PS4, this game struggles. At any given point, I could find myself switching from a graceful swimmer to a lurching juggernaut for several seconds. At least once in every game session, I would find myself staring dumbly through the sea bed into a blank void.

Worst of all, there was a 50-50 chance that the game would momentarily freeze each time I submerged from the water. The game actually struggled with the act of lifting my head above the surface.

It is a testament to this game that this level of sluggishness barely effected my overall appreciation for this game. It only got me killed once – I didn’t realise I was in the mouth of a cave and couldn’t swim up. I have heard that the PS4 Pro has very little trouble with Subnautica, and your average PC manages just fine.

If you are repulsed by open world games with crafting/survival mechanics, this won’t be the game to win you over. The O2 meter along with the continued chance of being eaten will only reaffirm your aversion. You can adjust the meters you play with, so no need to eat and drink, but this is definitely, comfortably, ‘one of those games’. 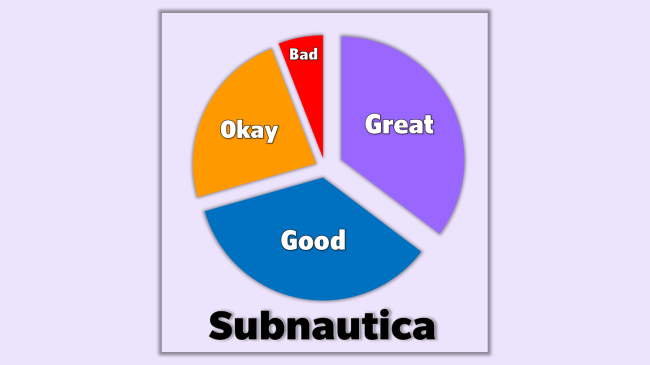 For absolutely everyone else, even if you’re not normally into the above-mentioned games, Subnautica is a wonderful experience. ‘Experience’ is a very apt word for this game. You are… well… submerged in its atmosphere and mystery from start to end, and its version of crafting is one of the more straight forward and satisfying versions I have seen. It is also an open world game with a clear end goal; how long it takes to get there is a conscious decision you, as the player, make.

If you like extra reading and audio files in your games, dive in to them, but I would recommend only interacting with the essentials, letting your imagination and the visuals run wild.

One thought on “Late Review: Subnautica”