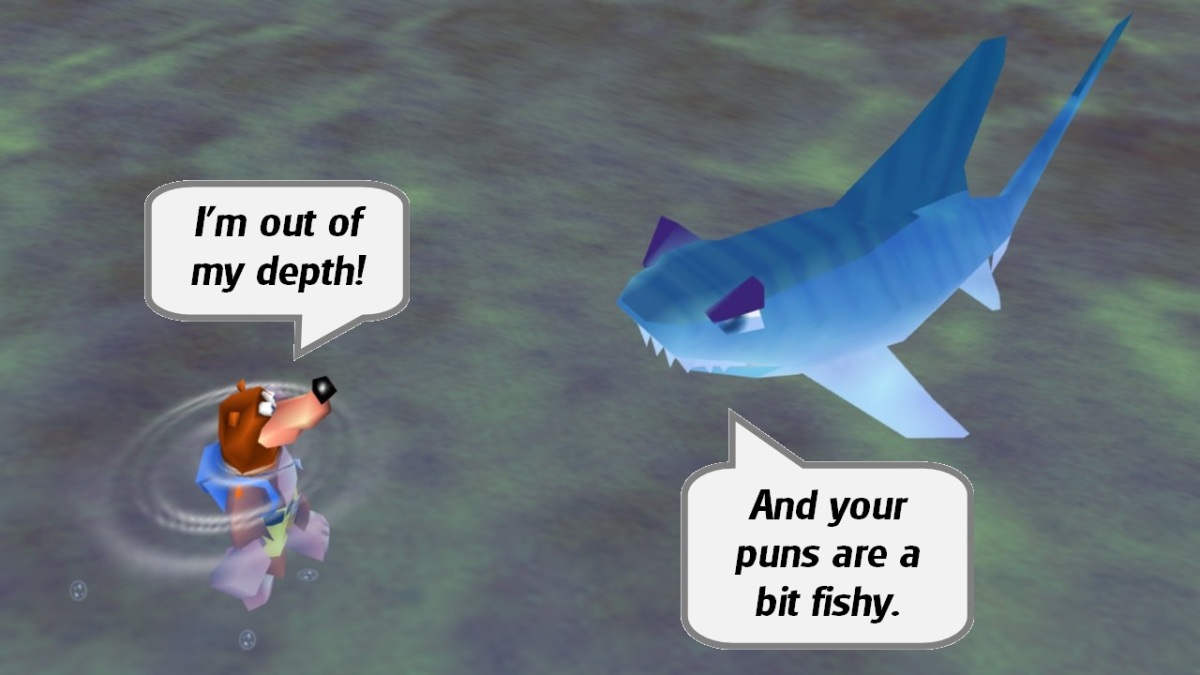 The hero seeks a new adventure. Every Mutant Ewok of the Decidedly-Evil Forest has been murdered; the Casually Racist Imps have each been forcefully evicted from the Cave of Moaners; the hero has made so many Dragon’s Teeth necklaces that they’ve considered setting up a little jewellery store in the city centre. (It’ll bring in a little extra money in the winter when all the big quests have dried up.)

But now the hero sets off for new lands. They clamber aboard their newly acquired sailboat – made from the bodies of two dozen Ents that really did deserve it – and casts off across the ocean. The wind takes the sails and adventure steals our hero’s heart!

What exciting new lands will our brave and sexy hero discover? What new monsters will they vanquish in the heat of violent battle? What… erm… what is the hero doing? I think… I think the ship is stuck… on… nothing. Okay then… now the ship is turning back. Well… that’s… all praise the mighty hero?

It doesn’t matter how open your open-world game is; it needs to accept its boundaries. There’s a mountain of games out there that advocate exploration, but you can only ever explore so far. Whether the game in question consists of a one huge, sprawling area or a collection of maps that can be traversed individually, the more open a game becomes, the more convincing they need to be with the ‘containment’.

Last week, in Part 1, I gave examples of how linear or more ‘straightforward’ games are designed within barriers that are either effective and simple, or inspiring and creative. The ‘container’ a game operates within might seem insignificant compared to what lies within, but the ways that barriers and world limits are applied can have a impact on your ability to enjoy any game. So this week, I am expanding the discussion and the game worlds in question. Here are some of my favourite methods for ensuring You the Player are properly contained.

You: I want to see what’s over there.

Game: But there’s so much fun stuff over here!

You: Yes, but now I want to explore the horizon.

[Game pulls a gun from its floor-length trench coat]

Talk about simple-and-effective. If you dare venture beyond the edge of the gaming world, the game will murder you. It sounds harsh, yet it’s a method which games have been using for decades. The details change to match the aesthetic of the game, but the message is clear: don’t you try and leave this game world.

Both Jak and Daxter: Precursor Legacy and Banjo-Kazooie employed sharks to help remind players that dry land is their friend. Whilst Snacker the Shark from Banjo can be fought off briefly, going out to sea is extremely hazardous. The Lurker Shark from J&D was a different kettle of fish. A bigger fish to fry, if you will. Having played the Precursor Legacy quite recently, I can contest that the rising tension that begins just a few feet out from the shore line, then builds as the controller shakes in fear, is still as palpable as ever. Oh course the moment when the bulbous Lurker Shark attacks is too funny to be scary. Very rare is it that an animation can so accurately be summarised by the phrase “Nom”. 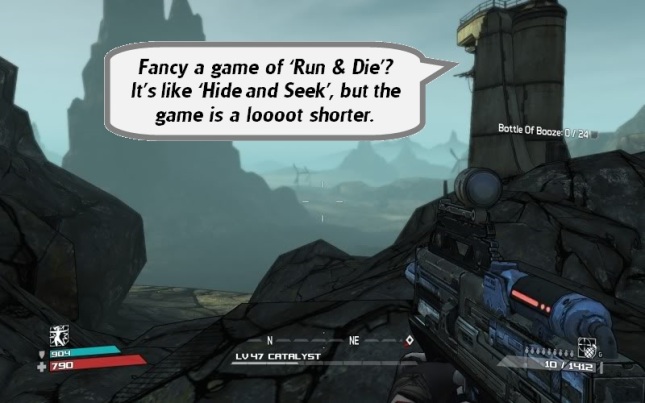 A more recent use of the Murder Wall occurs on the border of Borderlands. Rather than boxing the player in, the game creators decided that the best way to prevent players from leaving the designated shooting areas would be to blast the player’s character out of existence (temporarily of course). Gun towers fixed along the perimeter face their guns outwards in search of any poor fool who believes in the freedom to go where they please. The gun towers seem quite illogical at times (Couldn’t the guns turn round and wipe out these evil bandits now and then? Surely my rocket launcher is superior to an over-blown turret?) but gun towers don’t really care about my opinions.

The Grand Theft Auto series has tried several different methods of containing the player within the gaming world. In ye olden days, you weren’t allowed boats and you weren’t able to swim. Easy enough. With a rapidly growing ensemble of boats and aircraft more elaborate methods were needed. In the most current realization, all vehicles cut out once you reach a certain distance from the shore, and the sharks take what’s left of you. It’s like you’re living in an extremely aggressive version of The Truman Show.

The mid-point in this evolution of containment is, in my opinion, the strangest and creepiest. I know that the ‘Boomerang Barrier’ method exists in GTA: Vice City; I’m sure someone else will remind us where else it exists. When you hop into a boat and leave Vice City in your wake, it’s seems like nothing will stop you reaching the horizon… at first. But then, without argument or incident, the vehicle is turned 180 degrees. Should you try to turn around; an unseen force will resist you.

I like to put myself in the mind of the player character that experiences this. There are two possible options here. Either they are fully aware that the hand of god holds them back, lifted and turned like a turtle at the end of the garden. Or they themselves are steering the boat back, their minds influence by some unseen power. How did I end up in this boat? Ah well… guess I’ll head back to shore now…

Have you ever seen a country, kingdom or state that was a perfect square? I thought so. There are at least two states in America that fit the bill, but it’s not a common sight. Another question: have you ever seen a square island in real life? No you haven’t, stop lying. Nature doesn’t operate that way. If an island was square for a time, nature would sand those edges right down to… well… sand. Despite this, we as gamers are always willing to accept a countless number of gaming worlds that end in a perfect edge. Why do we do this? Usually it’s because the world within the Giant Prison is gorgeous and we are distracted.

I wonder if Cartographers in the various Legend of Zelda kingdoms ever remark on how fortunate they are to live in a land that fits the parchment so neatly. There’s no wasted space on much of any Zelda map, especially in hand-held console games. The island from Link’s Awakening has four, sharp corners. Perfectly arrange trees or impossibly steep hills, and pizza-cutter straight cliff edges are all employed to stop the distracted traveller. These straight lines suit the nature of these games. The way in which each block of the map is artificially segmented is complimented by the nice neat barrier that the player can follow. 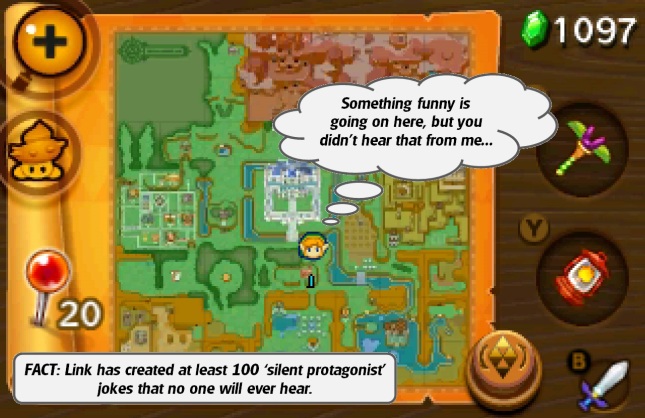 Some maps try to hide the prison walls they have built. Shadow of the Colossus does this by making one edge on the map a mess of scraggly rocks and cliff falls, but the map is a straight as an arrow on three sides. Once again, we have a game that justifies its style of containment. It’s a forbidden land, which no one must Wander [giggles to self]. Only low flying birds and tasty geckos are allowed in. The entire area is deliberately cut off from the rest of the world, so it makes sense that the location be walled in. And there’s Batman: Arkham Asylum, which is an expansive gaming world contained within a literal giant prison. These games are not just proud of their edges; they’ve made the ‘container’ part of the story.

When it comes down to it, the majority of open video game world are square or squarish in shape. The land might finish in a natural, crooked line, but you’ll still swim/fly/sail into a barrier that runs flat along the edge of the world. In that sense, games that create a Giant Prison around the wide world are openly admitting their limitations.

There is one more method that games can employ to come to terms with these limitations. It’s simultaneously the most obvious and the most difficult to generate. If you don’t want limits to the gaming world, make the entire world. It’s a big ask for any game developer, to create a world of such scale. Many of the earlier Final Fantasy games achieved this. 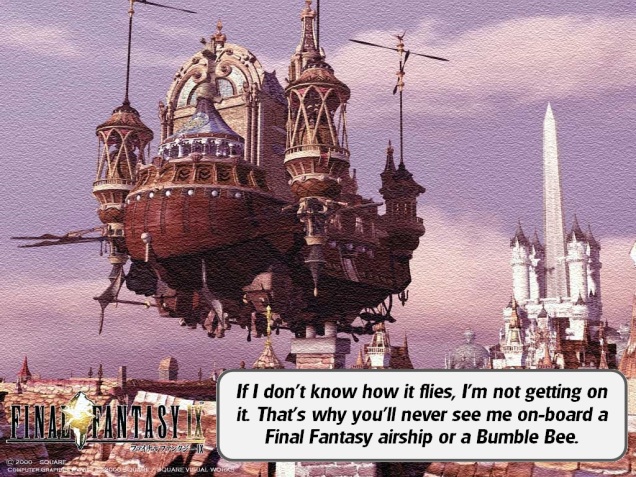 You can leave the right hand side of the map and reappear on the left, giving the feel of an entire globe (you’re not allowed to visit the North of South Poles though). However, these world maps are quite vague and without much variety, though I myself appreciate the effort made to create an entire earth to fly over. In most games where the intention is to save the entire planet, you’re not always so clearly reminded that there is in fact an entire world around you.

If you can think of any other ways that games create ‘containers’ around the player, or good examples for the methods I’ve suggested, please leave your comments below. Some excellent examples were already contributed after Part 1. If on the other hand, game barriers set your teeth a-gnashing, feel free to vent your indignation into the little comment box too.

2 thoughts on “How Does Your Game Keep You Contained? Part 2”