A month ago, I moved into my new home. The house is a big project in itself, with lots of renovation work and plenty of TLC required. Between the DIY and the new school term, I’ve had very little time to game in the last few weeks. That hasn’t stopped me thinking about video games, which is how we’ve arrived at the vitally important question above.

The home you currently reside in might be your first, or your fifteenth. Regardless, at some point you will have to move. The act of boxing, transporting, and unboxing your entire life will take a considerable amount of time and effort. Whilst the prospect of living somewhere new and shiny is exciting, the act of getting there is not. When this immense event unfolds, you will hopefully have friends and family to assist you, or have hired help.

Whilst those around you will do all they can to haul you and your stuff from A to B – and you should be grateful to them – let’s ponder how moving home would be made easier by employing video game characters. With all their power and might, skills and tools, could these virtual chaps put themselves to good use in the real world? I for one think they could. This would be a very short discussion otherwise…

Peruse my suggestions below. You’ll see I’ve put a great deal of thought/far too much thought [delete as appropriate] into selecting the persons that I would want helping me and those that I feel would make really bad choices. After reading, I hope you’ll have a few suggestions of your own.

This odd little query began to roll around in the chasm that is my brain hole well before the actual move. Between sorting and cleaning the old apartment I would steal the odd half an hour to play Fez. I’m so glad I got around to playing this charming little puzzle-platformer. When I had to put the game down and return to boxing up my possessions, I would mull over all the ways that Gomez, the protagonist, could use his perspective switching ability to benefit me.

I knew that once these boxes were packed and shipped to the new residence, they would need to find a sensible spot to go so that they weren’t taking up too much space. I’d also need to decide where all my furniture would look best. Gomez could offer me a unique perspective; I might think that the sofa looks fine facing one direction, but the little cutie would quickly tell me that this angle would look better. Add to that the fact that the adorable fellow is quite nimble and no stranger to carrying heavy objects, and you have a very helpful moving companion.

But let’s not get ahead of ourselves; first we need to pack. All of your clothing, books, DVDs, pictures, furniture, family pets*… all need to be packed into neat little boxes ready to be sent off to the new abode. The unpacking can be done gradually, and is usually enjoyable, as you get to plan out where everything goes. Unfortunately, sorting and packing proves to be a more laborious and tiring adventure. I would have liked Steve from Minecraft to help me.

Gamers often question the incredible ‘load limit’ of game characters. Various characters can carry amounts well beyond normal human limits, and Steve is one of the greatest lifters around. The weight of everything you own won’t even come close Steve’s physical threshold. So long as Steve can ‘stack’ the items you own in his backpack, he can carry them in piles of 64, and he can carry 32 piles. That’s 2048 books, or video games, or pairs of socks.**

Even the items that don’t stack won’t cause any hardship. In my latest move, the most cumbersome and awkward item to transport was my mattress. The act of carrying the overgrown cushion down one flight of stairs, stuffing it into the back of a van and levering it up another flight of stairs was unnecessarily taxing. Steve on the other hand, would have taken a few casual swipes at the fluffy thing, miniaturised the mattress (and bed) in one go, and then popped it safely away alongside a pile of my miniaturised neckties. Simple, effortless and, above all else, really entertaining to watch. 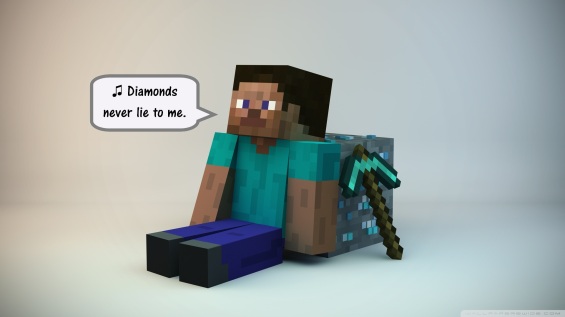 Just make sure Steve leaves his pickaxe in his own home. You don’t want him knocking a wall out.

Steve and Gomez might have the packing and sorting locked down, but they can’t really help with transport. They are pedestrians at heart, and I don’t see the move going smoothly if we all try riding pigs down the motorway…

We need a driver, and who better than Franklin from Grand Theft Auto V. The logic behind this choice (if we can call this a logical discussion) is twofold. Firstly, Franklin has become so staggeringly awesome that he has the ability to slow down time. Secondly, as with all GTA characters, he has the power to disobey all traffic laws without upsetting law enforcement. Only by bumping a police car or an unwilling pedestrian will Franklin incur the wrath of the police. These two attributes combined make Franklin the ideal person to move you and your items quickly and efficiently to your new home.

But let’s be realistic. All this talk of miniaturisation, reality bending and time manipulation is all well and good, but we have to appreciate that our world does not yet accept these insults to Physics. So let’s pick a more sensible option. Let’s see… Ah! Got it. Alyx Vance from Half Life could help you move home. And she could bring her Gravity Gun! 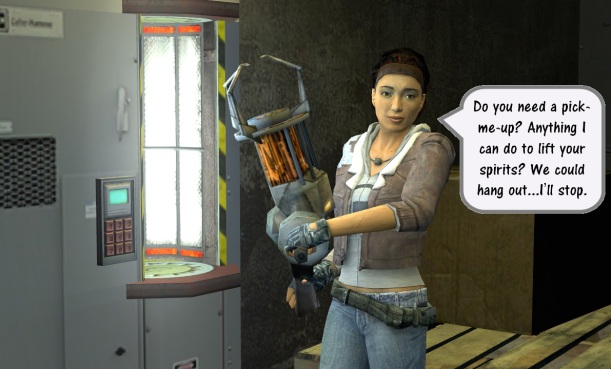 Alyx is one of my favourite deuteragonists of all time. Intelligent, resourceful and incredibly likeable; she more than makes up for Gordon Freeman’s reserved nature. Alyx is a pragmatist and has no aversion to rolling up her sleeves to help out. She also knows her way around electronics – very useful if the circuitry or lighting in your new digs need updating. But she’d prove especially helpful if she brought the ZPEFM along with her. Moving the wardrobe or dining table into place would be easy-peasy if the Gravity Gun could be used sensibly. And the ZPEFM in best placed in Alyx’s hands; you wouldn’t want to accidentally fire your Television across the front garden.

One last suggestion: Snake from Metal Gear Solid would make a good addition to the ‘moving team’. This was actually a suggestion from a reader. And what a great suggestion. Snake would be ultimate choice for one job that is often overlooked. When all your stuff is unpacked and in its place, there’s still one more thing to do: those empty cardboard boxes need to be tidied away. You could recycle them, try to pass them off to someone else… or you could let the guy with the love for boxes take them off your hands. 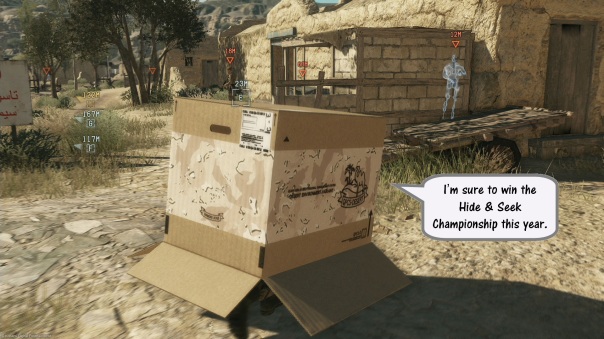 It doesn’t matter how many you have, Snake can neeeeever have enough boxes. Just be aware that he may try and prank you before he leaves. If he suddenly ‘vanishes’, just look for the box that’s trying not to giggle.

There are lots of friendly video game characters. They would gladly help you move, but that doesn’t mean you’d find them helpful. Take Donkey Kong: he’d delight in the task of carry the heaviest boxes to and fro, but I wouldn’t trust him with any boxes marked “fragile”. You might think about asking the Prince from Katamari Damacy to roll up all your things into a big ball for easy travel. However, by the time he’s finished rolling to the new home, he’ll have scooped up much more than you’d like. Whilst Link and his gadgets might seem like the perfect way to get the job done, he’ll ruin every ornament in your house before you can scream “Hey, Listen! Stop breaking stuff!” and don’t get me started on the mess he’ll make of your garden…

Moving home is exhausting and boring. Games are relaxing and fun. Combine those things together, and what do you get? That’s right: really confused looks from your new neighbours. More importantly, you’ll get the task completed in no time. Now if you’ll excuse me, I’m off buy some plants for my new back garden. Does anyone know where I can buy Peashooter Seeds?

Have you got any suggestions for game characters that would make moving home so much easier? Leave a comment below. I’m pretty sure this will be the most important question you have to answer this week.

* Family pets must be packed into boxes with air holes***.

*** Air holes must be cut into the box before the pet is placed inside.