The bullets fill the air as you tumble down the corridor. You curse your own lapse in judgement. You timed your approach perfectly, took the guard down from behind with one swift and surgical strike, but you failed to spot that second guard. After so much careful espionage, after so much sneaking, one blunder has led to chaos.

For one brief moment, the guards lose sight of you. You change direction abruptly, diving for cover behind a set of unmarked crates. Your pursuers are right on you; it won’t be long before they find out where you went. Crouching low, you scramble to check your ammunition and patch your wounds.

The guards are still searching furiously, moving closer to your position. You take a breath and prepare to defend yourself with maximum efficiency. The nearest guard, mumbling to himself, looms over the crate, tentatively moving to a position where he can see your hiding place. You begin to raise your weapon…

…and then he turns and walks off.

“Well, he got away. Back to my guard post.” He practically doffs his hat in recognition of your skills of evasion, checking his pocket watch to check that, yes, it has been exactly sixty seconds since the chase began. Should you slip up again, he will commence the chase anew, but until then, good day to you, sir or madam.

Of course, this is normal. This is how guards are in stealth games. Having hidden just long enough, you vault like a panther across the crate and quietly take the unknowing goon out before he has a chance to turn around. But then, he was never going to turn around. The intruder had beaten the system, and as long as you didn’t walk directly in front of him on his way back, this gentleman was not going to scan for you until he returns to his designated spot.

I’ve often felt that stealth in video games has a certain gentlemanly quality to it. There’s a surreal respectability to the ways that the enemy follows strict rules of engagement and demonstrates selective memory. Whilst they are dedicated to the hunt once stealth is broken, once you have stayed hidden for the chosen amount of time you are deliberately forgotten. You passed the test, player, be on your merry way.

Stealth games – or games with stealth mechanics – are a very popular thing, but no one really wants an authentic stealth experience. We as players want to know that if we trip up just once, we can correct the mistake and return to stealth-ing. If every guard was on justifiably high alert after one less-than-sneaky incident, we’d never take the risks that lead to awesome takedowns.

Of course, the back-to-business attitude of sentries and soldiers in games can be attributed to limitations, especially in older games. You couldn’t have the situation escalate every time a guard spotted you, otherwise you’d have the enemies from every level descending on you to remove the threat from the premises (as they should do). There has to be some order, some structure to all this. I call it the Gentlemen’s Code of Stealth (or Gentleperson’s, if you prefer).

The Gentlemen’s Code of Stealth is especially present in stealth games set within an urban environment. If a video game is set in a dystopian wasteland or amongst sprawling forests and hillsides, you’d be forgiven for calling off a search; the suspect has probably fled the scene. When the game is set within the confines of a maximum-security facility, or the restrictions of a cityscape, the searchers should probably be more vigilant, because the person that took out half the crew is still there. The Code says otherwise.

The best part of video game stealth is how the player is identified in the first place. I’m fairly certain that if you were standing in shadow, or crouching in a bush, and I was looking in that direction, I would definitely see you. Camouflage can only make you harder to spot, not invisible. There are rules in place however; if the guards have recognised that you are hiding in the pre-selected foliage, or you’re only showing some of your face as you peek around the corner, they will ignore you until you make a mistake… or you garotte them.

Peripheral vision is also a key part of the Code. If the guard sees you ahead of them, out in the open, they have every right to defend themselves. If they only see you out of the corner of their eye, then they must permit you the benefit of the doubt. First, they must exclaim “hmm?” or “what the?” very loudly. They must then walk slowly and predictably towards where the player was spotted, muttering to themselves: “I think I saw something over here”. If the guard finds no one at that spot, they must look around for a short while, before exclaiming that they “must have been seeing things” before trudging back to their starting position. 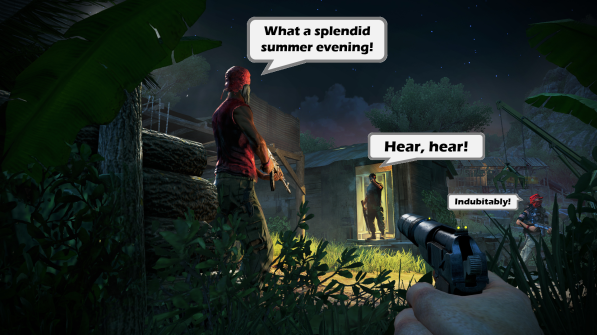 Most important of all, if the protagonist attacks a sentry whilst in stealth mode, the victim must accept their fate and give no clue or signal to their allies. They cannot call out, fire their gun or kick out noisily. They should never protest audibly, because they were brought down fair and square. On the rare occasion that the player must succeed on a quick-time-event or a button mash to complete the takedown, the guard must only resist enough to make their death slightly inconvenient.

I’m bad at stealth games. I just never seem to make the right choices, wait the right amount of time or plan properly before striking. Therefore, I’m always grateful when stealth in video games is so forgiving. If game designers went for realism and total logic when it came to stealth, I’d never get anywhere. I’m particular fond of the stealth in more combat-heavy games these days. The kind that allows you the opportunity to rush an enemy even though they saw you in their final moments.

Having the enemies stand by noble rules of engagement helps people like me tremendously. What fine ladies and gentlemen you are, NPCs of stealth games! A noble breed like no other. I have the upmost respect for you… alongside my knife in your rib cage.

Have you noticed similar quirks of stealth games? Do you find stealth to be an odd thing, or exactly what it needs to be? Leave a comment below.