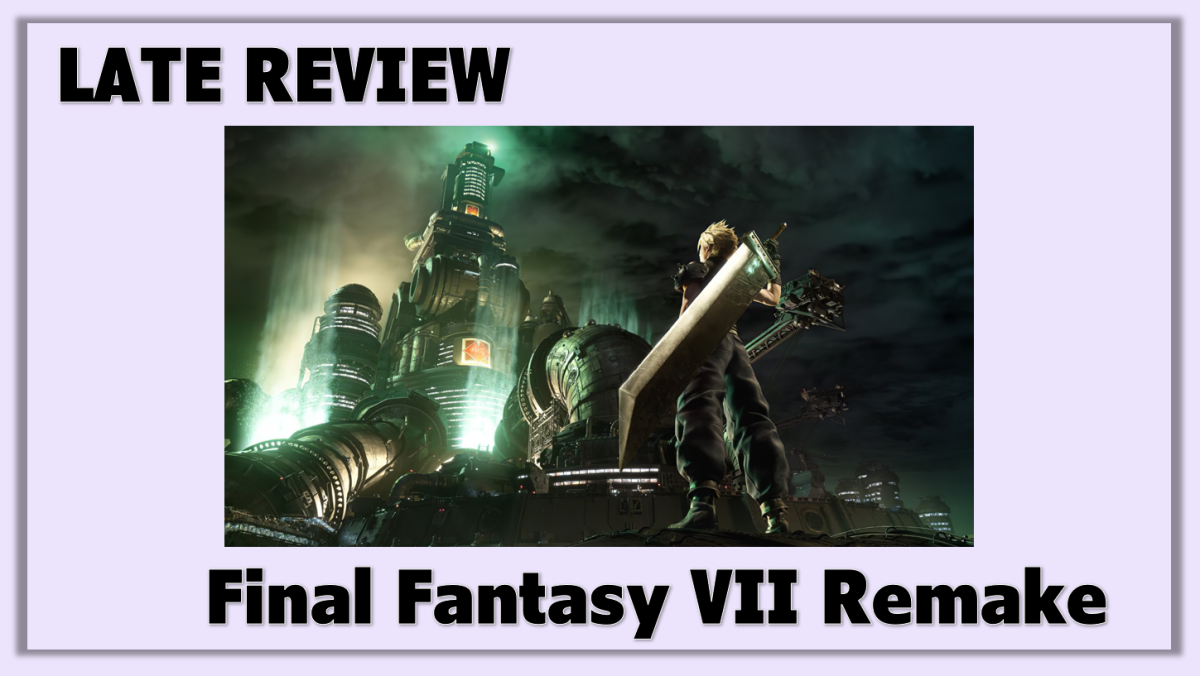 I recently replayed Final Fantasy X, and when I was nearing the end I made a comment to a non-gamer friend that I might play Final Fantasy X-2 again.

They immediately had questions:

I didn’t have the heart to break it to them that there are actually three Final Fantasy XIIIs. With all the other spin-offs, prequels and pseudo-sequels out there, I honestly don’t know how many Final Fantasy games are out there myself.

And now we have Remakes in the mix.

This is an odd game to review. You have to consider how much nostalgia is affecting opinion. This is true when playing a sequel, or a ‘remaster’, but for a game completely remade it is especially significant. I am definitely a fan of Final Fantasy, I’ve played FFVII through twice and very much enjoyed the movie sequel, Final Fantasy VII: Advent Children.

I’m not the worlds biggest fan of the series, I’ve not played any of the games before VI and I’ve skipped Final Fantasy XIII and the online games. I am not the kind of staunch supporter of the series that might overlook the quirks and limitations. Nevertheless, I was excited about the remake, and that is bound to affect my judgement.

So I’m going to do my best to review Final Fantasy VII with different perspectives in mind. Some people may have avoided this game out of fear of what it does to memories of a beloved game, some will be intrigued by the fuss people make over the original, and others will have overlooked this game because the franchise means nothing to them yet.

How the Game was Played

When you (attempt) to wipe away the tasty glaze of nostalgia coating a game like this, certain aspects still impress. The design of Midgar, the city you explore throughout the game, is richly detailed and fascinating for anyone who enjoys a good sci-fi/fantasy setting. Built on gigantic pillars above a barren landscape, Midgar is a game world of two halves. A cyber-punk, hyper-industrial cosmopolitan is piled onto the ‘plates’ above the pillars. Dusty, decrepit, ramshackle townships dwell beneath the shadow of the prized city above. I won’t go into detail about the rest of the city, partly because it’s central to the plot. What’s important is that each combat location, every backdrop, not only looks great but is also fascinating to be in. When in the underbelly of Midgar, I often found myself tilting the camera upwards to scan the humongous, metallic dish blocking out the sky. The world has a history, bleak and oppressive, and the scenery changes with the story.

The music is incredible. I say this aside from the sheer joy I got from hearing the original score wonderfully enhanced by a full orchestra. Standing on its own, the soundtrack is deliciously dramatic, full of gravitas. As will all great games, every note enhances the storytelling.

Past the looks and sounds of the game, there’s still a lot to praise. I knew I was going to enjoy the story, the visuals and just being able to float around in the nostalgia, so it was combat that needed to impress me. On the whole, it did.

I enjoy turn-based combat, and Final Fantasy always seemed to be one of the best at this. Final Fantasy X is my favourite in the franchise, and there is so much to love about  that combat system. Since then the games have toyed with a hybrid of button-mashing, fast-action combat and drop-down menus. It has always felt confused and convoluted, as if the games didn’t want to be turn-based anymore but didn’t know how to really change.

Final Fantasy VII Remake seems to have finally figured things out. The real-time, hack-and-slash-and-parry element is quick, responsive and simplistic. The turn-based half of the hybrid is reminiscent of the old games, and offers the player the same amount of variety and player agency. Simply put, in the original, your characters would stand in a line and they got to make a move when a colourful, little bar by their name filled up. In this game, the little bar is still there, but now it’s just for your special attacks and spells. Until the big moves are ready, you can hack-and-slash to make the bar move quicker. You have all the momentum of a fast-paced action game, pausing when needed to choose the big attacks from the old-school list.

I can’t say for certain how a newcomer will react to the story of Final Fantasy, but it’s certainly compelling. Once you realise that the game starts with you helping a bunch of terrorists trying to blow up one of the city’s reactors, with only marginal care for the impact on human life, you quickly get the sense that this will be an interesting tale. 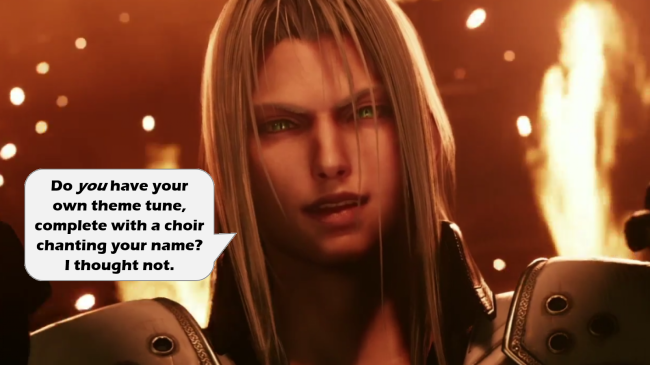 Cloud, the games’ protagonist, is the least compelling character in the game. Stoic, rarely emoting in any way, a tame personality even in the most combative situations. Yet, that’s actually a good thing. This isn’t the first time a video game protagonist has been the dull part of the adventure. Sure enough, the story he is in, the characters heroic and villainous, more than make up for his passivity. The story was a joy in the original, now with excellent voice acting and with this new stretched out version of the game we get much more chance to appreciate the world building and amazing characters. This is where expanding the game really works: it gives time to relish the story and appreciate a larger performance from each character.

Now this is where it’s going to get a little odd. Gameplay and story are both in my ‘Great’ column, through and through, but they also, simultaneously, not that good. It’s all because of how this ‘remake’ was put together.

This isn’t a Final Fantasy remake. It’s a complete reconstruction. You probably already know by now that this is a part of the original game. The game has been stretched in some places, twisted in others. As it was warped, holes appeared, and the developers filled those holes with extra story, extra characters, extra missions, side quests and collectables.

Whilst the extra time is great for the story, and it’s fun to see where they put each bit you remember, there’s a lot of superfluous gaming around it. It’s all fun, to an extent, but I think that even newcomers will be able to tell when the game is running in place. I’m pretty certain I love each character a little bit more for the added time I got with them, but I was acutely aware of new content that wasn’t going anywhere.

As for the combat style, whilst it is an improvement on what I got on with in Final Fantasy XII, avoided in XIII and kind of enjoyed in XV, the fact is that this new style never fully explained why it’s better than the original turn-based style. Yes, it’s weird to see heroes and foes standing opposite each other and waiting turns to attack, and I had fun with the new gameplay, but it’s never better than the original.

It’s also not without it’s quirks:

There isn’t a lot about this game that is fundamentally bad. It’s well put together, it all works on some level. Even if you don’t know FFVII, this is still a fun toy without sharp edges.

Yet, I do always want to address the negative where it is, and there is one potential problem with this game. Something that could be bad. It could also be incredible:

Spoiling nothing, on it’s own, the ending of Remake is an awesome spectacle. It’s not going to be everyone’s cup of tea – it’s a wild ride that was only added because the first chunk of the game now needs a stand-alone ending – but it is true spectacle. It is ‘great’ in the sense of how mind-boggling-ly bold the developers are being with the narrative. To newcomers, the ending won’t garner the same reaction, but you won’t also have any reason to be repulsed in the way that other fans have.

Here’s the thing: the ending has the potential to be good, to be a brave diversion and the start of something that keeps the nostalgia bubbling over whilst simultaneously shining  something new and awesome in our faces. It also has the potential to be very, very bad. The ending may have set up a storyline line that offends long time fans and distracts first time gamers with its contrivances.

In other words, the ending to Remake is the moment before the stunt driver performs their most dangerous trick. We have no idea if this is a going to work, or whether they actually know what they are doing. If they pull this off, then this was all worth it. If they don’t, then this really was a terrible decision…

So the way in which Final Fantasy VII has been prolonged is both a boon and a burden, and the innovations they have made are both satisfying and something that never quite hits the mark of the original. Of course, if you never played the original, you may not notice the issues… or you’ll find the hybrid mechanics and time wasting all the more annoying because you don’t have preexisting love to help you forgive. 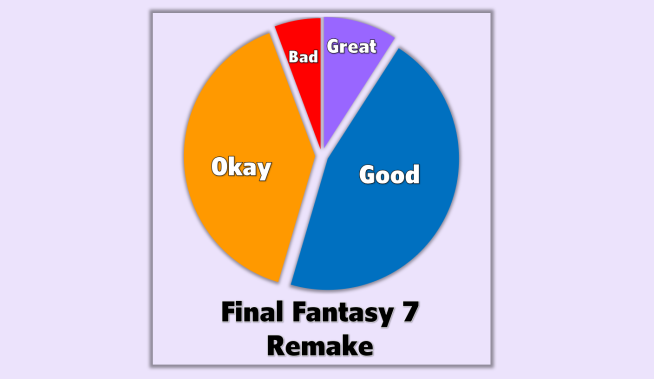 I had a great time with this game, which you could argue means that it is a great game. However, the game was really good, and it was allowing me to have a great time with my nostalgia. It offered fun gameplay, gorgeous visuals and a lot of room to enjoy an old experience anew.

For newcomers, or fans who can take off the rose-tinted spectacles, this is still a good game, with so much to enjoy, but there’s also a noticeable amount of padding, a lot of dawdling, a lot of unnecessary. There is also the very real chance that all players, new and returning, are going to be very dissapointed when the other parts of this remake emerge.