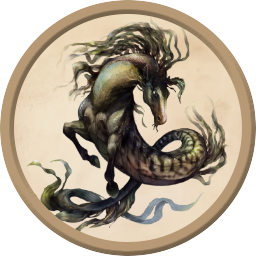 Want a huge shapeshifting water demon in your Dungeons & Dragons?

I’m enjoying making each one of these monsters. Even the mundane critters. But every so often, Fantastic Beasts throws out a big, complicated monster that I have to unpack. Part of the challenge with the Kelpie is that it’s linked to another beast further into the book that I haven’t made yet.

Between the ability to turn into the Loch Ness Monster, and the way it drowns and eat people with relative ease, the Kelpie needs to feel a little dangerous.

The first thing I nailed down was the speed of the Kelpie. With that big swim speed and the ability to get out of combat quickly, dragging a gullible rider down into the depths becomes all the more rapid and terrifying.

It’s suggested that morphing into a sea serpent is something only the biggest and baddest Kelpie can do, so that became the limit of its shapechange. I decided that the sea serpent has a challenge rating of 5, which puts it on par with a ‘giant shark’, so I think that tracks.

The most important aspect of this stat block is the proficiency in deception. The Kelpie will approach the characters with grace and frivolity, giving every impression that it wants to play and help. Look at him, splashing around and doing adorable flips, he wants to take you to a magical island kingdom. Hop on its back! Only the most suspicious players should detect that the cute water horse might want to eat their faces.

If you want so more Fantastic Beasts in your D&D, click here!