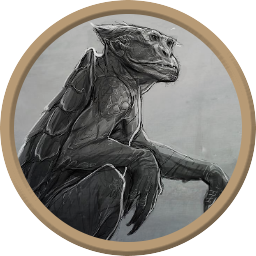 Combat in Dungeons & Dragons is a lot of fun, but some of the best encounters I have experienced are actually very short. This can be down to player ingenuity; a clever use of a spell or a moment of tactical genius undoes the best laid plans of the big bad. It can also be down to the DM offering a simple solution to the encounter. If the players have been paying attention, they will solve the problem before it gets out of hand.

This is the kind of encounter I’d expect for the Kappa. An inherently creepy beast that could prove deadly for the less alert adventurers, that can be very easily defeated by the more knowledgeable explorers.

END_OF_DOCUMENT_TOKEN_TO_BE_REPLACED

Another mini blogpost from another mini Fantastic Beast with a mini D&D stat block.

This time, we have a little bird. That’s almost all their is to it really. Apart from the fact that it has verbal diarrhoea went it dies.

END_OF_DOCUMENT_TOKEN_TO_BE_REPLACED

Some days, it’s a flying, invisible snake with horns. Other days, it’s a pixie that can carry people up a mountainside.

Today it’s a ferret that drops the F bomb.

END_OF_DOCUMENT_TOKEN_TO_BE_REPLACED

In Dungeons & Dragons, size isn’t everything, but it is important.

Whether a creature is ‘tiny’, ‘large’ or ‘gargantuan’, size has a mechanical affect. A human-sized sword will usually to one die-worth of damage, whereas a giant is going to hit you with at least three dice loads of damage. Health depends on how many ‘hit dice’ a character has, but the size of a creature changes the dice you are rolling. A regular spider will have d4s, whilst a giant spider gets the eight-sided guys.

Size often informs the other stats a creature has. A small creature is likely to have a much lower Strength Score. There’s no defined rule in-game, but there’s a logic to it. A mouse, try as they might, is not going to win a tug-of-war against an elephant. Larger creatures are going to be naturally stronger because of their sheer mass.

All of these leads me to this point: building monster stats for the Imps and Pixies of the Potterverse required some careful thought.

END_OF_DOCUMENT_TOKEN_TO_BE_REPLACED

Word of the day: ophidiophobia – fear of snakes

Arachnapobia is the one irrational fear we’ve all heard of, but lots of people are afraid of snakes. I suppose that’s down to the likelihood of each phobia popping up. In the UK, you are much more likely to meet an itty-bitty spider than you are to have any interaction with a snake.

I have one Dungeon & Dragons group that have never encountered a spider, monstrous or otherwise because of one friend’s intense phobia. And it’s a good rule to have – D&D has a some alarming arachnids with extra powers. Not content with ‘giant spiders’, the Monster Manual also includes stats for a ‘phase spider’. These monstrosities can shift in and out of the current plane of existence, reappearing wherever they feel like.

I mention this, because the Horned Serpent taps into the same mentality: take a creature people have a primal reaction to, and give it magical powers.

END_OF_DOCUMENT_TOKEN_TO_BE_REPLACED 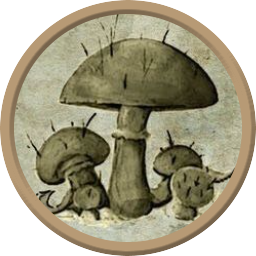 It looks like a mushroom, smells like a mushroom, lives it’s life in the way that a mushroom does. But uproot this super-rapid breeder and you’ll see tentacles, not roots. Oh yes, this mushroom is actually an animal that barely does anything. That’s cool I guess.

Doesn’t really do much for us in a Dungeons & Dragons campaign, but hey, we’re making them all.

END_OF_DOCUMENT_TOKEN_TO_BE_REPLACED

You can convince Muggles of a lot, huh?

Specifically, you can tell normal people that the frog-monster eating all the cattle is only a hoax, and that’s apparently enough for everyone. Fantastic Beasts doesn’t really hint at whether memory charms are used to hide the existence of Hodag, so I’m guessing people think a wild animal ate all the calves? That farm went out of business and they never found what ate only the baby animals but that’s a hoax, I guess?

END_OF_DOCUMENT_TOKEN_TO_BE_REPLACED

Some mythical beasts make sense to us, even if they don’t actually, logically or physically work. Many of these beasts are well liked, even thought of as pretty, majestic or cool. Most people would agree that a Pegasus is a fun beast.

“What’s better than a horse?” they say. “How about a horse with wings?” Everyone cheers.

But then there’s those less-well known beasts that are just less fun, less aesthetically pleasing…

“What about a horse that’s also a fish?” a lone voice calls out from the back. The room goes very quiet.

END_OF_DOCUMENT_TOKEN_TO_BE_REPLACED

Neither of these beasts really needs their own blogpost. I could push and pull and statistics about, but they are mechanically very similar creatures. Moreover, these are another pair of beasts that already exist in the D&D Monster Manual, and there’s not enough in Fantastic Beasts to really cause either creature to stand out as particularly different to the original.

END_OF_DOCUMENT_TOKEN_TO_BE_REPLACED

The last few beasts I’ve given the D&D treatment to have been a little wimpy – pet ghouls, tiny glumbumbles and irritating gnomes – which are good for a low-level encounter or to add as a little curiosity. But I really wanted to get back to the beasts that are fantastically dangerous. Along comes the super-angry Graphorn, and I’m a happy gent.