People play games for different reasons. Some people play to win, to fulfil their need to triumph through a show of skill, logic or chance. Others play for the simple joy, unphased by who wins, uninterested in the finer points of the rules. For many, games are simply something to do with friends enjoying the social side.

That last point was the basis for my second reason for why I think you should try out Dungeons & Dragons. It is one of the most sociable games out there. I also believe that the other factors above are especially true for D&D; it can be played competitively or for the simple fun of playing a game.

Which leads me to reason #3:

Reason #3 – It has Something for every kind of Gamer.

Even if you take away the social side of gaming and strip away the inevitable fun that comes with playing any good table-top game, D&D at its core is something that can appeal to all gamers. No matter how or why you play games, Dungeons & Dragons has qualities that will appeal to you.

Dungeons & Dragons is a team game. The host of the game, the ‘Dungeon Master’, narrates the adventure and controls the monsters, whilst the players band together to defeat their enemies and overcome challenges. You are therefore trying to work together to defeat the bad that the DM throws at you, and for many players this is the driving force behind why they play the game. 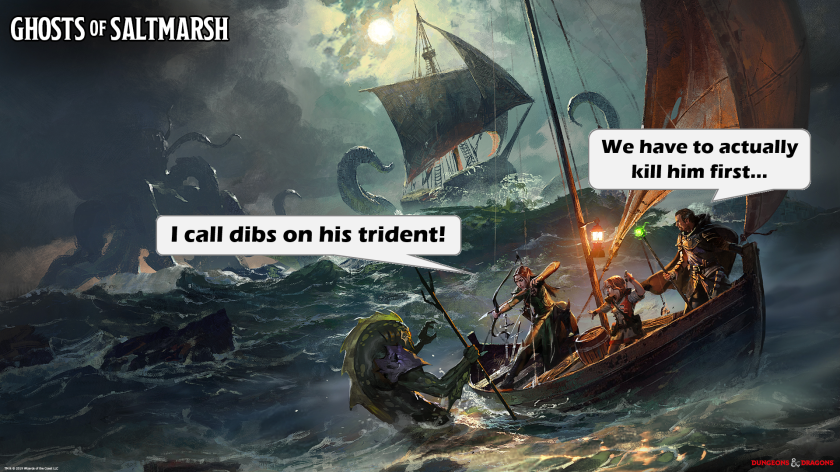 Many adventures carry on over multiple sessions, or last just a few hours, but in any case there are multiple ways a player can get the Win that they are searching for. Each time combat breaks out, players can swing swords and sling spells at their foe, looking to achieve the killing blow. Alternatively, you can player a character whose powers boost their allies, allowing you to share in the victories around the table.

When not in combat, you might find yourself in dungeon puzzle rooms, journeys often contain an unique peril and many towns have difficult characters to tackle. Each problem represents a chance to prove your own ingenuity, or your characters’ strengths, and feel awesome doing it.

Not everyone is thinking about the end of a board game. Some people want to collect or the pieces or cards, make a clever move, or roll high numbers on a dice. There are a lot of Table Top Role Playing Games out there that are focused on survival and shared hardships, but D&D is primarily about making a powerful character, that continues to grow in power, in order to battle almighty monstrosities. It’s a game described as “Avengers with swords”.

On top of all the spells and combat skills you can throw around, the adventure your DM creates can be filled with powerful weapons and relics, imbued with magical attributes. In the wider world, a successful character/party can eventually forge alliances with kings and guilds and can ever construct their own stronghold.

There are so many ways that D&D provides you with the opportunity to build a powerful character in a world ready to be saved… or conquered.

Fighting monsters and levelling-up stats are all vital pieces of the game, as they are with so many board and video games. When that is said and done, D&D is a game based on narrative, as I mentioned earlier.

Many players turn up for the tale of adventure. Becoming a hero-adventurer is the ultimate goal in many campaigns, but the journey to that goal is where the real excitement is. 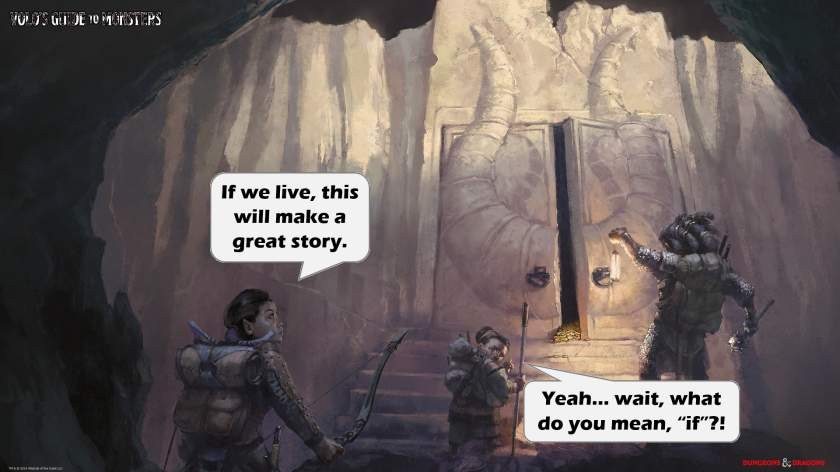 Your DM may be working out of a campaign book, or creating their own world for you to explore. In either case, what has been created is far from a linear story. There will be at least one ending to the tale, but there will also be side quests, random Non-Player Characters to traverse with, and plenty of world lore to uncover.

After a long quest, you might return to the nearest city. Whilst another player sends their character off to buy items at the nearest market, you can explore the city you find yourself in, pull books out from the local library or chat with the local NPCs. There may be useful information to find, or just extra content that expands your understanding of the world.

Depending on the DM you have, you might also find that you can add to the story even though you are not the Master. Details about your characters’ backstory can be fed into the world, off-hand comments you make might inspire your DM’s imagination, and in some cases your DM might actively ask you to contribute details to help build the finer elements of the world around you.

D&D is a TTRPG – a Table Top Role Playing Game. For some players, the ‘role playing’ part simply implies that you are steering your character through an adventure. You can take this further however. The game can be much more challenging – and thought provoking – to dive a little deeper.

Even if you didn’t make your character, because you were handed one by the DM or you printed a pre-filled sheet, there are four little boxes on the character sheet that suggest how that imaginary person should be played:

Of course, if you make your own character you choose these qualities. Each group you play with will put a different emphasis on playing the character’s ‘character’. When I’m a player rather than a Dungeon Master, I lean into the character I’ve come up with so long as I don’t slow the game down or over-complicate the situation. Other players are entirely in character for the duration. It’s actually written in the rules that a DM can reward you for really cool character moments.

You can play Dungeons & Dragons for the group challenge that it continuously offers, for the sense of awesomeness and escapism that come with a high-fantasy adventure, or to be part of a rich narrative. All these elements are there, it’s up to you to decide what your main interest is. Each game session, campaign setting, DM and group creates a new dynamic, and a new set of experiences. It’s always good to find out from a new group how they like to play the game.

That makes three reasons to play Dungeons & Dragons. Links to the other two are below. If you’re a player, add you own positive experiences below. If you’re still unsure if you want to start playing, feel free to ask me anything.

Thank You For Playing

#1: It’s easy to start playing than you think.

One thought on “Why should YOU play D&D? Reason #3”