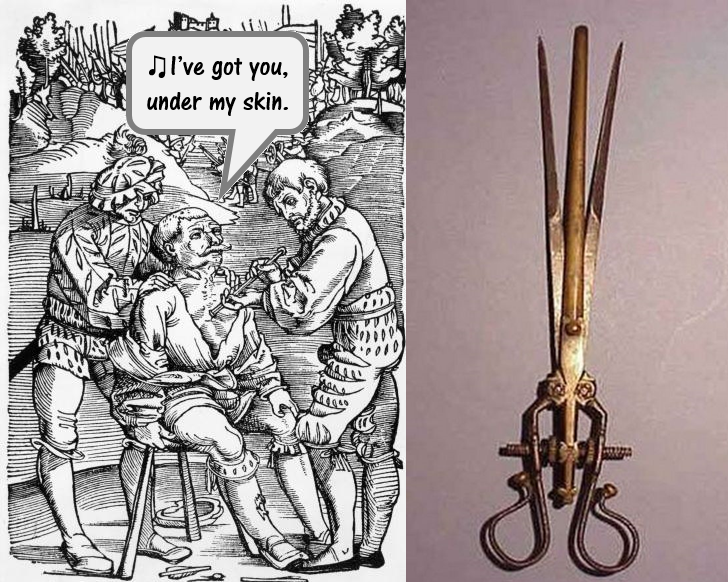 There’s lots of things I enjoy about over-analysing Skyrim, and the responses I get are a big part of that. There are a pleasingly small number of people that misread the title and my intentions (“Oh sure, the game with dragons is veeery accurate…”), and a fantastic number of readers willing to add their own knowledge and join the discussion. Sometimes, one of you lovely people will step in and flesh out something I have mentioned or correct a minor mistake, which is awesome to see. Learning should be a two-way exercise after all. And there’s still a lot of untapped History within The Elder Scrolls. 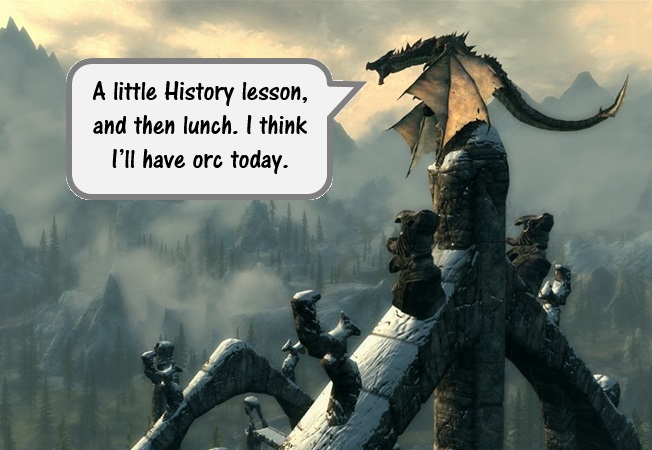 If you’re joining this gaming/history blog at Part 4, hello and welcome. I started playing Skyrimfor the first time last November, and I’ve been climbing every tower and turning every rock for signs of History. Sometimes real life Historic details are the clear inspiration for a detail in the game, and sometimes the game appears to stumble into a historic comparison. And in one particular situation, History actually helps to explain one of the most famous lines in the game…

I was surprised by how few NPCs have actually expressed the immortal phrase, “I used to be an adventurer like you, but then I took an arrow in the knee” during my journey. Oh sure, at least four different people have shared that particular woe with me, but the sheer magnitude of references to this phrase on the internet had led me to believe that this line of dialogue punctuated every sentence. I half expected to discover that this was actually a form of greeting among townsfolk.

Whatever your view of the in-game catchphrase, the statement is very strange. There seem to be a lot of old adventurers with life-altering wounds in the same region of the body. This is doubly odd when you consider the presence of magic – a swift restoration spell can heal even the most grotesque of wounds. Why are there so many people in this world with long term injuries that shouldn’t exist?

To start with, we have to consider the function of arrows. The main purpose – as I’m sure we all know – is to allow the user to stab a target from long range. A nice thin, sharp arrow head will find its way through most light armour and cause the target a distinct amount of grief. However, this isn’t the only purpose. Most arrows are designed to find their way into the soft, squishy, important parts of a person and set up home there.

Above is a collection of arrowhead designs. The ‘barbed” arrowheads present the gruesome way that arrows are made to cause maximum pain. The arrow goes in very easily, but will want to stay forever. This actually exploits the way that the skin and muscle with try to naturally close a wound. To make matters worse, arrow heads are usually bound to the arrow shaft in such a way that they will break away if yanked on. A common adhesive was beeswax; the arrow head would stay glued on in flight, but come undone when the injured warrior tries to de-arrow themselves. That might help to explain why not every arrow in Skyrim can be retrieved from the corpse of your recently departed enemies.

This situation was so common that barber-surgeons actually invented arrow-pulling tools to make the job easier. They did not make the job less excruciating or graphic. Most of these tools involved pushing/pulling the surrounding flesh further away from the missile, making it easier to retrieve the offending item by hand. You would want a Potion of Cure Disease handy, because the process is undoubtedly going to lead to infection alongside the brain-punching pain. The surgeon at hand may have an anesthetic (white wine was popular in Europe) and maybe a mild sedative (opiates if they’ve got them), but there’s no denying this process is incredibly dangerous. And if it goes wrong, the barber surgeon may return with another tool: a dirty, big saw.

No matter how magical the environment, I wouldn’t blame any resident of Skyrim if they turned down the procedure. A flesh wound can be healed, but an arrow inside the knee is not coming out without visiting a world of pain. Especially since some of the arrow designs in the game are really elaborate. It’s conceivable then that injured warriors may turn to the other form of surgery available. It’s still painful, but brief and with less risk of amputation: cauterisation. A few pokes with a red-hot poker would seal the flesh right over that tricky little arrow head. In my mind, it is entirely plausible that the NPCs bitterly recalling their adventuring days are the people that feared the more invasive surgery. Or worse: they had the arrow pulled, but the surgeon didn’t do a very good job and left a piece of arrow behind…

An abundance of Xenophobia

People in Tamriel are so mean too each other. Wherever you go, someone is talking trash about Dark Elves or Bretons or anyone who doesn’t look like them. It could be argued that racism is going to be more prevalent in a place where there are actually different races.

What I want to consider is: did xenophobia exist on this level in our past? Or is there something in the water making these people ultra-bigoted?

The word ‘barbarian’ springs to mind. In its original form, the word means ‘foreigner’, yet today the word conjures up an image of a slovenly, dull-witted warrior with a thirst for violence. The Romans used the word to refer to pretty much anyone that couldn’t speak Latin (and the Ancient Greeks used the phrase to refer to pretty much anyone who wasn’t Greek). While the word is innocent, there is an undertone of smug-patronisation implied in its usage. The Romans certainly thought that 1st century Britons were an odd bunch:

“Very many [Britons] who dwell farther inland do not sow grain but live on milk and flesh, clothing themselves in skins. All the Britons paint themselves with woad, which produces a dark blue color; and for this reason they are much more frightful in appearance in battle. They permit their hair to grow long, shaving all parts of the body except the head and the upper lip. Ten and twelve have wives 16 common among them…” -Julius Caesar, 55BC

This is big man Julius describing the “most civilised” Britons he knows of, and even then he considers them to be hairy, scary wife-swappers that don’t know how farming works. Brutish and uncivilised. This is the way that the highly advance Romans saw the tribes that they were conquering. If there’s a parallel to be drawn with Skyrim, it’s with the Nords and their views on races they deem lesser than them. Nords will refer to each other as ‘Kinsman’, and sneer at at the more tribal species.

On the other hand, many tribes found an easy peace with the Roman invaders – the Trinovantes in the East of England were more than willing to befriend the conquering legions – rather than resist. Even the notorious Boudicca showed respect and civility to the Romans… that is until her husband died. After the Romans took her land and abused her family, her opinion of the Romans turned wildly.

The Vikings are similarly remembered for their ‘barbarism’. According to contemporary sources, they were violent and vicious pirates who beat up monks and burnt their monasteries. If this was entirely true, then it must be pointed out that when most Viking raids were at there height, the Vikings were Pagans; Christianity meant very little. To the Scandinavians, the wooden monasteries full of gold and silver would have made for easy targets, but the plundering would not have been sacrilegious. Furthermore, the sources that have recorded Viking raids largely come from monks and other holy men. One famous bad-mouther of Vikings was Alcuin, a Christian scholar, who went to great pains to record how evil and horrific Viking attacks were along the English coast, despite spending most of his time in Europe.

This is not to say that all Viking xenophobia was unwarranted; the British tribes had reason to be wary. Not all Vikings came to raid – the word Viking is a collective term after all. Many Vikings came to occupy Northern England and parts of Ireland and Scotland with a greater focus on trading resources back to Denmark and the rest of Scandinavia. King Canute (also spelt Cnut by those that like to live dangerously) was able to conquer England, snatching it from Anglo-Saxon rule, and what followed was nearly twenty years of peace and prosperity. Vikings and Saxons would continue fighting long after that, but History proves they were capable of being civil.

Of course, it’s very easy to see how the local populace would mutter negativity. In Tamriel and in reality, a great deal of conflict has occurred, a great deal of which has been fought between different regional groups. Whilst kings and chiefs can broker peace, the underlying tensions will not dissipate easily.

For most medieval people, travel is not part of their existence. Tribes were far more isolated by their smaller populations and the level of technology. If a visitor did appear, they were either coming to wage war or trade. If the visitor is a Norseman, it could well be both. The level of Xenophobia would therefore depend on the unique experience of that village. Given that most people had no need to read or write, there was little chance that the average Saxon would have their opinion swayed by an angry monk’s writings. In Skyrim then, the Xenophobia is rifer due to the way in which various races/species are merged into the same living space. Diversity is high in Tamriel, but so are racial tensions. I blame the Nords myself.

Just two comparisons this time around. Usually the connections between History and Videogame are much smaller, briefer topics; I felt that historic medicine and historic attitudes were much broader topics and should be given more space. There were many more comments I could have made about ancient health practices, and much more could be said about historic xenophobia. I think I could easily overdo the latter; this is intended as a light-hearted, videogame analysis after all.

I hope you continue to enjoy this kind of blog, and that if you have any knowledge to add, (or corrections to make) then you will leave a comment below. I’ve definitely got a Part 5 lined up, and then I’ll be looking for another game to over-analyse. I’ve already had some great suggestions.

3 thoughts on “How Historically Accurate is Skyrim? Part 4”