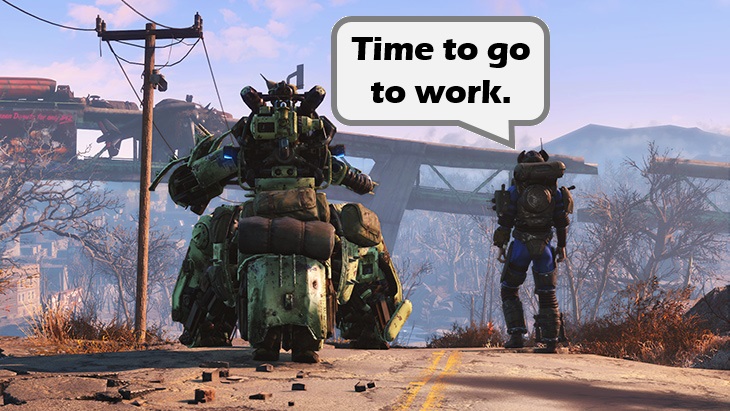 Hello internet, it’s been a while. Ten months since my last blog in fact. There have been many reasons for the long pause: my marriage last August; the extensive renovations on our new home; the workload that comes with being a teacher, and other very grown-up things. For a few months I wasn’t even really playing video games, never mind blogging about them.

I have, of course, started gaming again. I’ve hardly made up for lost time, and the amount I can play has adjusted. The last few months have led me to the startling conclusion that I am, in fact…

The way I game has changed gradually over time, but it’s only this year that I have truly embraced the fact that the way I play needs to be altered. Maybe you’ve been through a similar experience? Perhaps you have yet to feel a change. I’ve found a few ways to adapt gaming to suit my adult life.

When I was younger, if two decent games were the same price as the game I really wanted to play, I would go for the two games. It would pass the time until the newer game dropped in price, and the older games often turned out to be better than expected. Besides, I’d get through all the games I wanted to play eventually.

Then one day, I looked around and saw the pile of games I swore I would play next. As much as I wanted to play every game, the amount of time available did not allow for this. So, I needed to be more selective.

There are numerous ways you can filter through the games you want to play, heart-breaking a task as it may be. Firstly, stick to the games that you know are going to be good for you. If you ‘might like’ the concept of a new game, you may have to brush past it. You may find yourself playing a smaller variety, but with the limited time of a Grown-Up Gamer, you’ll want to spend time playing what you know is good for you.

Secondly, you want to play games that suit your lifestyle. As a Grown-Up Gamer, you need to know what kind of game suits you. Do you spend that one or two hours in the evening letting off steam? Or do you need a game that will allow you to chill out on the sofa? 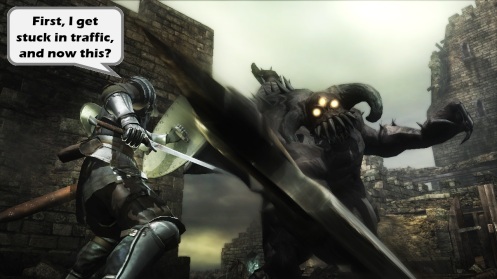 I thoroughly enjoyed Demon Soul’s and the first Dark Souls, but I know that those games aren’t good for me in the weekday evenings. I’ve learnt that after a day of teaching, I like a game that I can mellow out with. After two hours running back and forth between the legs of a monster made entirely out of a dozen nightmares… well, I’m not mellowed out. So I’ve had to part ways with this series for the time being.

Fallout 4 on the other hand, is an excellent game for a grown-up. If I need to vent, I can actively seek out beasties in bunkers and bludgeon them. If I want a calmer evening, I can jaunt across the scorched landscape, meeting new survivors. If I’m totally wiped out from a full day’s work, I can help build a settlement or tinker with my Power Armour. Knowing that I haven’t got X number of games to play after this means I can take my leisurely time completing the game (to the extent that I have no idea what the story is).

As a Grown-Up Gamer, you have to decide: what kind of gamer are you, really? Are you at your most gleeful fighting against your fellow man, humiliating them on the battlefield? Or are you most content with a good story and the occasional friendly chat with a non-player character?

I’ve enjoyed the multiplayer experience in the past. It’s a very addicting process, and a great way to extend a game beyond its single player mode. The problem for me, I realise in my ‘maturity’, is that I just don’t have the competitive streak needed to hold me to these games. If anything, I’m a cooperative gamer – I enjoy games that promote teamwork almost as much as I enjoy the challenge of single player.

You might argue that most online games have the team component. It’s often in the name (Team Deathmatch, for example). For me, those games don’t feel like co-op games. There are people in the game that have no reason to obliterate me for points, but in the end I’m still a solitary player trying to get the highest score. If my team wins, super… but there was no actually teamwork involved. 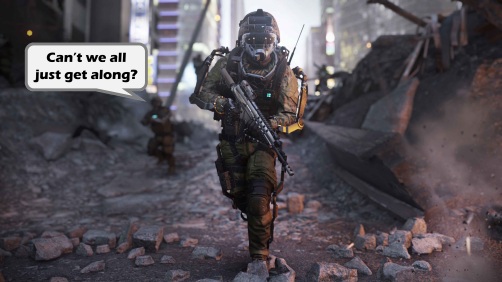 With this in mind, the number of games I wish to play is greatly reduced. A year ago the multiplayer-orientated Star Wars Battlefront would have drawn me in even if the single player was lacking. The Grown-Up Gamer in me knows that even though I have enjoyed Battlefront in the past, I’m just not enough of a competitive gamer to find long term enjoyment from it. By accepting that the game isn’t quite right for me, I opened my reduced gaming time up to other games. Instead of picking up Battlefront, I went for Metal Gear Solid 5. There’s a multiplayer aspect in there somewhere, but at heart MGS5 is a huge single player game that I could dip in and out of at my own pace.

I wouldn’t want anyone thinking that just because I haven’t been able to play video games means that I haven’t had fun. I’m not asking anyone to cry me a river over the loss of gaming hours. I’ve spent a lot of time with electric sander, wood filler and paint brush whilst I’m at home, but I’ve also had time with friends. It’s with those friends that I have embraced a new… or rather old… style of gaming.

I played the usual board games going up. The classics, Monopoly and such like. I’ve played them with friends and family, usually at Christmas or with friends who don’t care for video games.

More recently I’ve made friends with people that play board games more regularly. Whilst for me most table top games don’t invoke the same enjoyment I find in video games, the social side of playing a table-top game more than makes up for that. Eventually, I was introduced to a game which does scratch the same itch: Dungeons & Dragons.

For me, no matter how pretty a game is or how well it plays, the story is the most important part. A video game doesn’t need to be weaved around an epic tale; for me any game that gets my imagination whirring gets a big thumbs up. To take a favourite of mine, it’s not just the overall story of XCOM: Enemy Unknown that I enjoy, each encounter with the alien enemy is so unique and personal that I like to imagine the scene for the soldiers’ perspective. So it stands to reason that a table-top game built around story creation would interest me greatly. 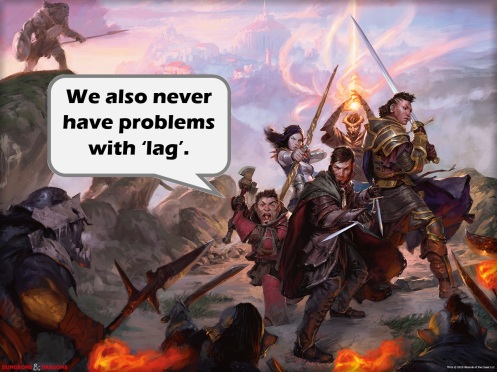 I know for many people, D&D was something they grew up with. I knew of it, but only started playing just over a year ago. Once a month, I and a group of my teacher friends play Dungeons and Dragons. For the last eight months I’ve hosted games online for my friends who live too far away to regularly meet up with. I also hold a weekly D&D session for students after school.

When you’ve got so much grown-up stuff to do, playing video games can often feel like you are shirking responsibilities. More sociable, table-top gaming has for the last year afforded me the same enjoyment of gaming, but because it’s also a pre-booked, sociable experience it feels much more necessary. Moreover, I can attest to D&Ds ability to ensure that friends that live a distance away from each other can ‘meet up’ and game on a regular basis.

All of this reflection is in itself a very mature thing to do. By taking the time to consider what enjoy about games, you can save your precious time for experiences that really matter. If you remove the need to play every sort of game, you feel less rushed to complete the game you are currently reveling in.

I’ve commented in the past on how I have enjoyed games within genres I usually dislike. I’ve often said I don’t like stealth and platform games, but in recent years I’ve played games in both categories that I have enjoyed. In the last year, I realised that I neither dislike stealthing nor platforming; I dislike games that seem to punish you heavily for failure. I’m bad at both games types, so if I can blast my way out of a failed stealth attempt, or if a fall from a ledge takes me back to a reasonable checkpoint, I am much happier. 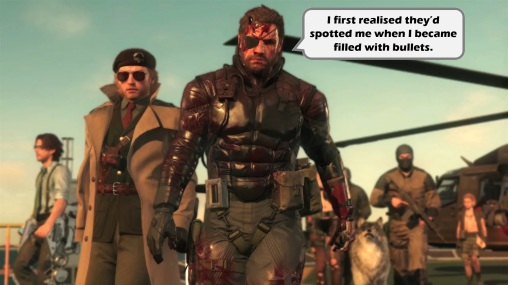 As I mentioned earlier, I’ve turned away from competitive games in the past. However, I’ve realise of late that I have not given games with truly cooperative elements enough attention. Once I complete Fallout 4 (or, let’s be honest, get to a point where the vastness of the sidequest list overwhelms me), I may look into playing more team games.

The point being, if you are a Grown-Up Gamer, take time to really reflect on what you really enjoy in gaming.

With a new outlook and a re-organisation of my time, I am also back into my blogging. I shall hopefully be posting once a month from now on, rather than once a week, but I am back.

Until then, are you a Grown-Up Gamer? Have you had to make similar alterations to your gaming time? What advice would you give to younger gamers who are about to realise that they don’t have as much time as they used to? As always, I look forward to hearing your thoughts.