Whilst I would never consider myself a violent man, I find weapons fascinating. Whether they are a work of fiction or non-fiction, I see them as curious inventions that say a great deal about our species. Our History is full of strange and striking creations of war. It’s when Fantasy and Reality collide that things get really interesting

END_OF_DOCUMENT_TOKEN_TO_BE_REPLACED

I swear on my honour that I can be a sensible gamer. I do know how to play games properly. It’s just that, now and then, I am compelled to ignore the path the game has laid out for me. It’s why people think I’m so cool and rebellious. [Turns imaginary cap backwards]

Spore and The Elder Scrolls IV: Oblivion are significantly different games. One is a game a God Game where the player controls the ‘evolution’ of a species from primordial soup-dweller to galactic dominator; the other is an action role playing game set in a mythical-medieval world. Yet there is one very clear similarity between these games where I am considered: the way I misbehaved when playing them.

This is the third week of me admitting my misbehaviour. In Dishonored, I was way more violent than the game suggested I should be. In Lara Croft and the Guardian of Light, I lost all sense of respectability. As for Spore and Oblivion, I actually started playing both games as intended. I put lots of hours into each game, following the rules for the most part. However, despite several play-throughs of both games, I have never finished either of them. I would deliberately quit both games at a certain point, and go back to the start.

END_OF_DOCUMENT_TOKEN_TO_BE_REPLACED

There’s going to be another Uncharted game?! Quick, hide all the precious historic artefacts! Raise airport security! Alert the United Nations to the threat! Make sure… What? No, I don’t think I’m overreacting.

The recent announcement of Uncharted 4: A Thief’s End has by now generated a tonne of excitement. I’m sure that it will make for a fine addition to the franchise. However, our collective excitement for another instalment should be put on hold. We need to talk about Nathan Drake’s bad habits, and whether or not we can afford to let him run around on another adventure.

END_OF_DOCUMENT_TOKEN_TO_BE_REPLACED 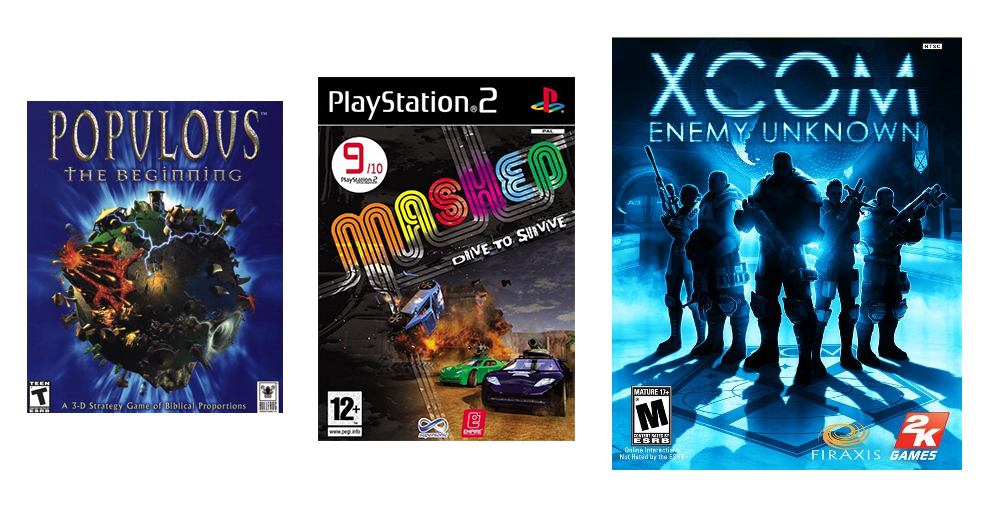 Some of the greatest games only get one play through. Whether the adventure lasts for ten hours or one hundred, or occupies your gaming time for several months, there will come a point where the most entertaining game fulfils its purpose. The story is complete; all achievements are unlocked; each puzzle solved; every enemy slain. No matter how great, most games fail sooner or later.

But not every game. Amongst the shelves of past games or buried in a hard drive is that game you can always return to. Regardless of how long it’s been since your last visit, that game will always deliver. When it seems like you’ve played every game in your collection, a little voice reminds you that you could always play that game again, and you can’t think of any objections. I would very much like to talk about that game today.

END_OF_DOCUMENT_TOKEN_TO_BE_REPLACED

The stage is set. Mario’s desire for a male child is an ever-growing concern. His first wife, Pauline, has failed to produce the heir he craves. Age and stress have taken a toll on her body. Mario wants a new, younger wife that will secure his succession, and the vibrant Princess Peach has presented herself as an appealing alternative. A major barrier stands between Mario and his new wife: Bowser refuses to allow Mario and Peach to marry. How will Mario solve his Great Matter?

Last week I introduced a revision lesson that I use with Sixth Form students studying the reign of Henry VIII. The lesson uses the Mario games as an analogy for Henry VIII and the impact his actions had on the English Church. It’s a great lesson for everyone involved and the students recall a huge amount of information through the activity.

END_OF_DOCUMENT_TOKEN_TO_BE_REPLACED

In my mind, there are few competitions nobler and more respectable than a Pokémon Battle.Pokémon Blue demonstrated to me that even the wildest creature can conduct themselves with fairness and restraint in each encounter. No words are uttered between combatants, yet each knows there place and fights with the upmost honour. 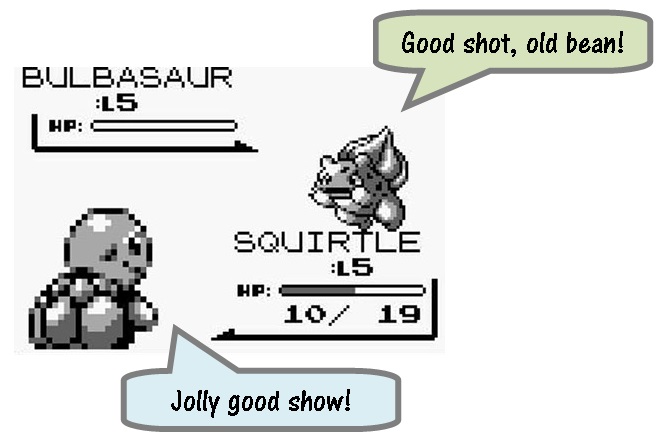 This is the third time I’ve written about my slightly awkward transition from Pokémon Blue toPokémon Y. Last week I grumbled about how in my day we got by with only five Poké Balls and didn’t need all these fancy versions. Since then I have become a little more open minded; after reading your comments and recommendations I went and bought a batch of “Quick Balls” and haven’t looked back. Thanks to your responses I’m slightly less of an old gamer when playing Pokémon.

END_OF_DOCUMENT_TOKEN_TO_BE_REPLACED

Last week, I touched on my reactions to Pokémon after skipping four generations. I’ve enjoyed the game so far but many of the new elements and changes have left me feeling old or confused. Last week I referred to the overwhelming sensation that Pokémon Y seemed to be in much more of a hurry than Pokémon Blue. Whilst I’ve enjoyed my time in Generation VI immensely, there are other aspects that have left me feeling out of touch with the Pokémon series.

Firstly, the sheer amount of new items filling up the inventory in Pokémon Y is extraordinary. In my earlier adventures with Pokémon, there were five types of Poké Ball. The most important trio were “Poké”, “Great” and “Ultra” Balls, which were all an experienced monster catcher needed. Each variant was more expensive than the last, but had more chance of snapping shut. The Master Ball stayed in your backpack forever and Safari Balls were as radical and fancy as Pokémon capture became.

END_OF_DOCUMENT_TOKEN_TO_BE_REPLACED 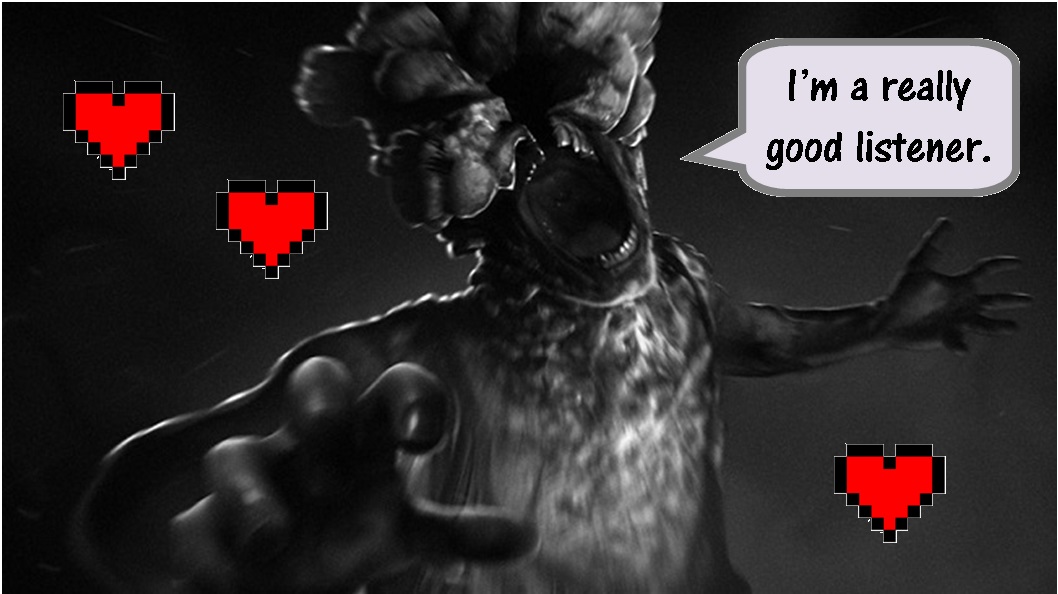 In my never-ending journey to the summit of Backlog Game Mountain, I finally reached The Last of Us. It took a long time to get there, but it was worth it. I’d heard great things, and was expecting to find an amazing game. It really is all sorts of amazing. I wasn’t however expecting to feel sympathy for the Clickers.

What is intended to be the creepiest creature in The Last of Us ended up earning my pity. They are monsters, but in my mind they are misunderstood monsters. Below, I will explain why I feel this way, and also share my thoughts on other creatures that I believe should not be punished for being bad.

END_OF_DOCUMENT_TOKEN_TO_BE_REPLACED